Posted by SanLuisObispoMom.com on Tuesday, November 12, 2019 Under: Monterey
We had our very first PSEA camp experience at one of the cabins at Camp Del Monte over the weekend to visit Monterey!

It was such a neat experience and we felt like it was an appropriate place to stay during our 3 night vacation. The cabin had a full kitchen, 1 bedroom, a bathroom and also two twin beds and a futon in the living room. It was a great set up for 6 people and we maximized our space. We're a family of 4 and also invited a couple to stay one night during our weekend. Here are the pictures that I took below from our trip. 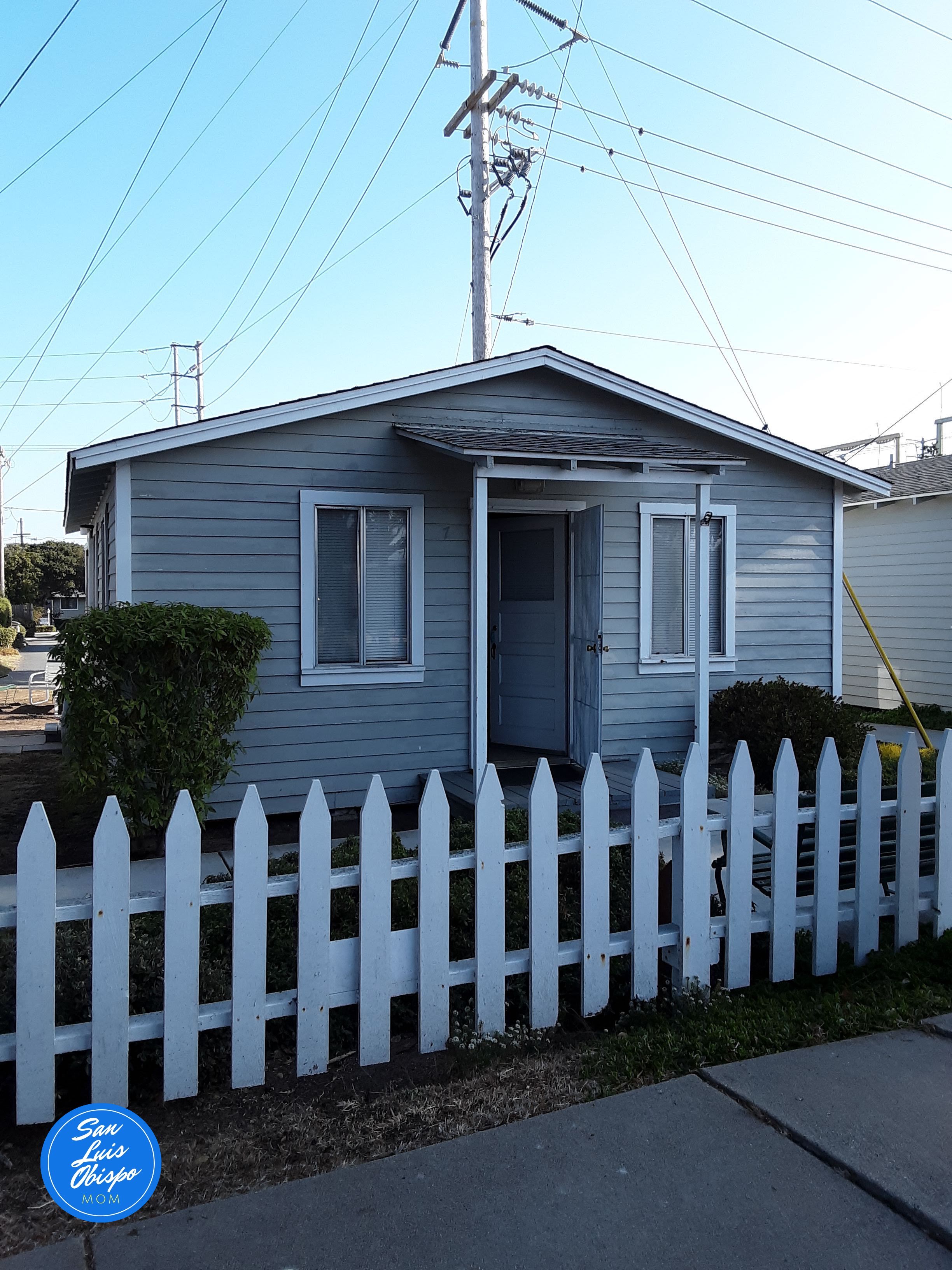 (front of our cabin)

My husband booked on the PG&E's PSEA website for our cabin a few months ahead of time and there were only 2 cabins left that were not reserved for Veteran's Day weekend so we chose Cabin #7 among the last two that were left. They had parking spots on the property near the transformers and some of the cabins had room where you could even park right next to it. We opted to parallel park on the street facing the front entrance as it felt like a more homely welcoming. Cabin #7 didn't really have enough room to park behind it. However, parking parallel to the street was perfect for us.

As we were entering through the sub-station driveway to get to our cabin, it felt like I was part of the movie Divergent where we're fenced off from the world around us since we arrived around 6:30PM and with the time change, it was almost pitch dark when we checked in. 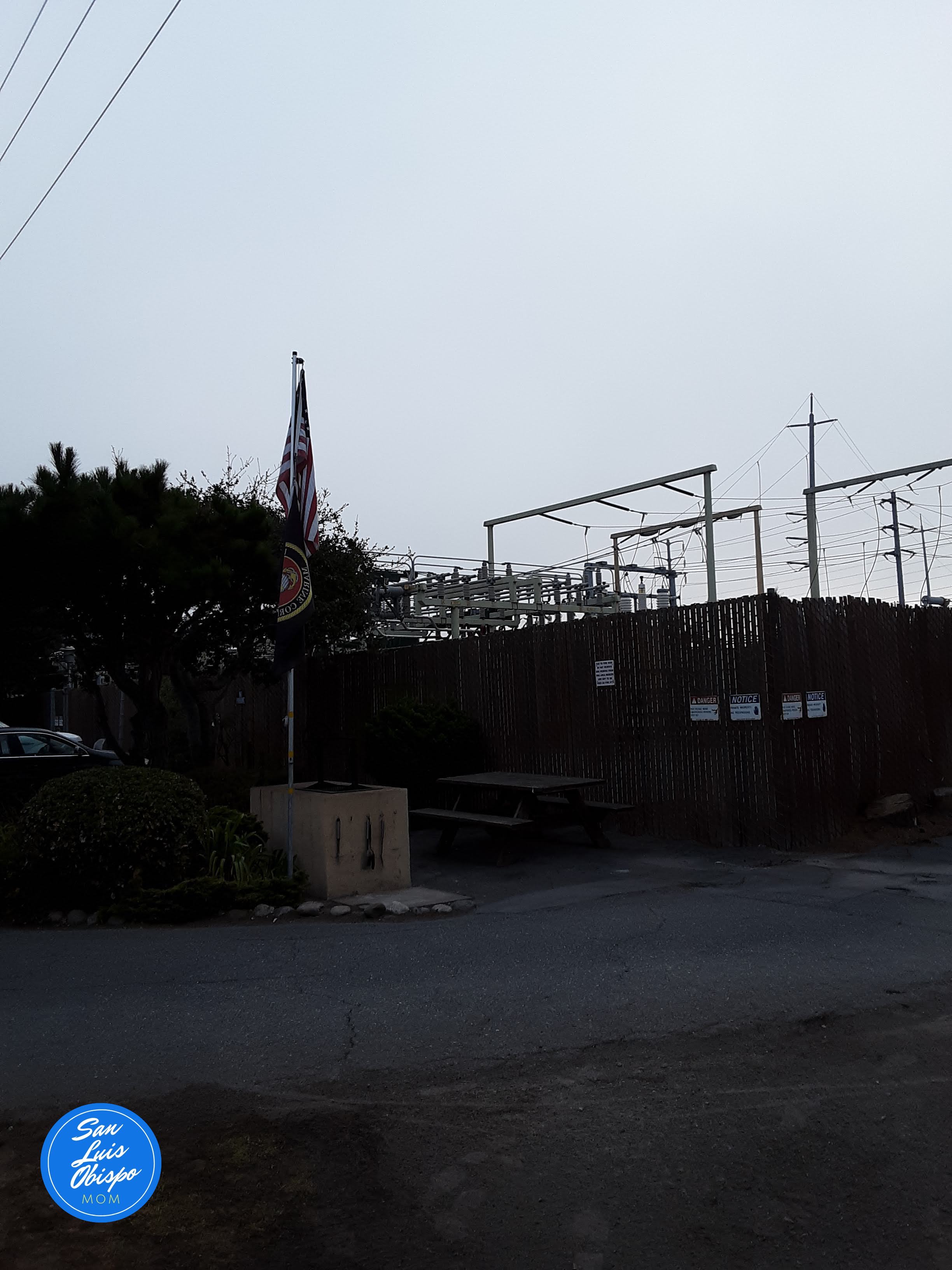 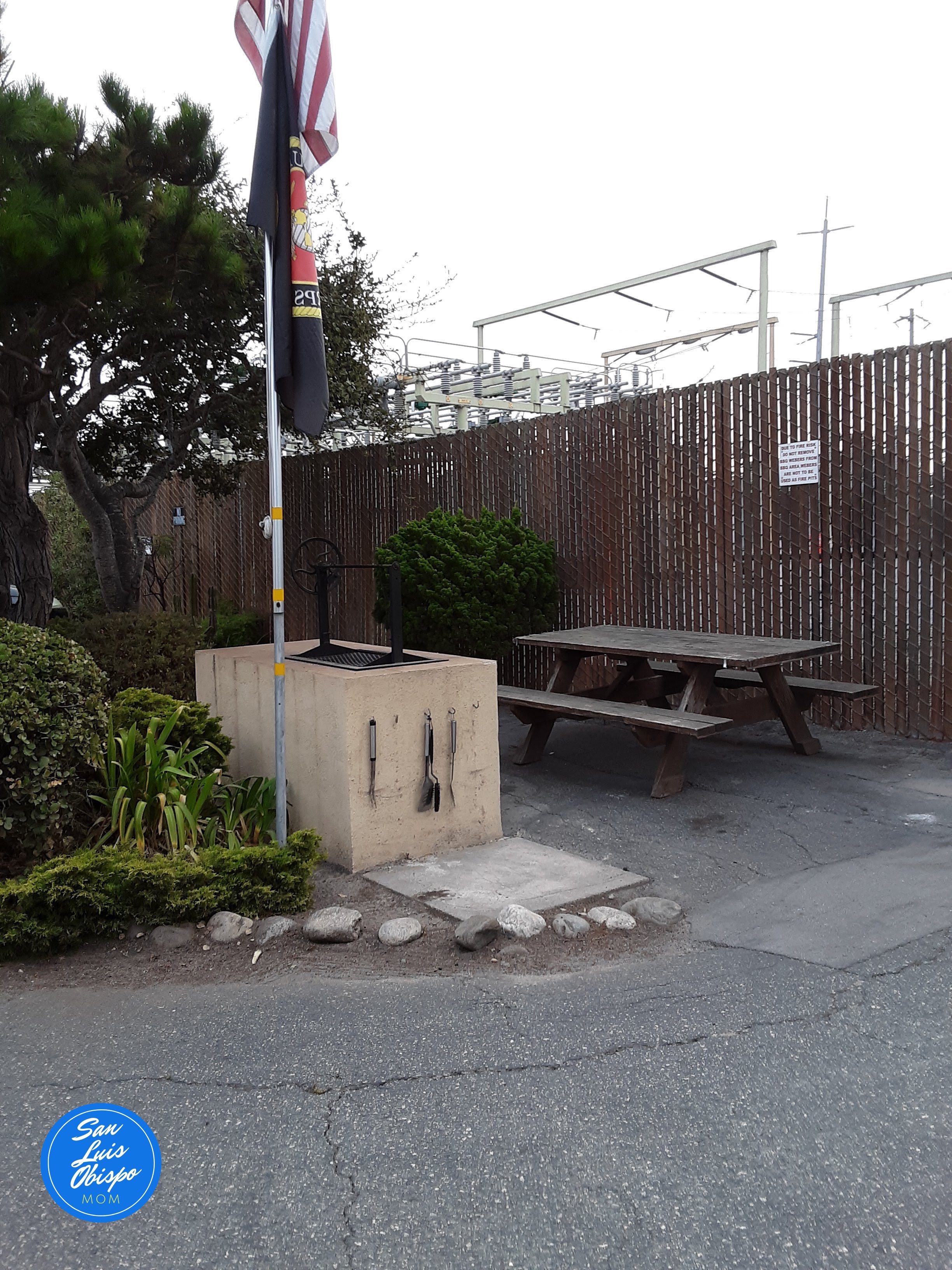 But I assure you, it is a completely different feel during the daytime. See the pictures above to see the difference between the look of the sub-station near night time and then seeing it during the day. There's also a Santa Maria grill and a picnic table outside for campers to use.

A great amenity for families with kids is a playground on the camp with a baby swing, 2 normal swings, a long slide and a couple monkey bars. It was great for the little ones. 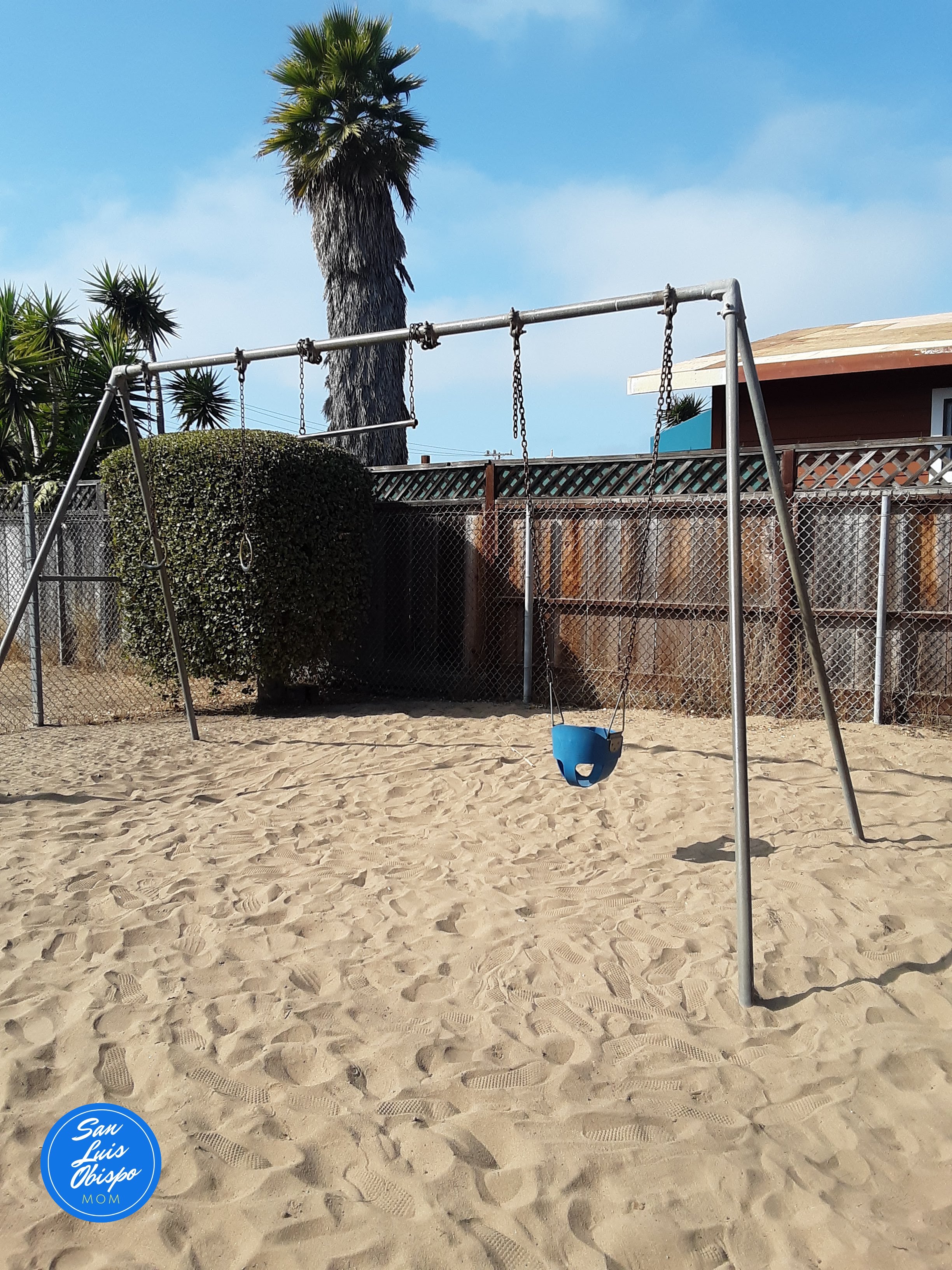 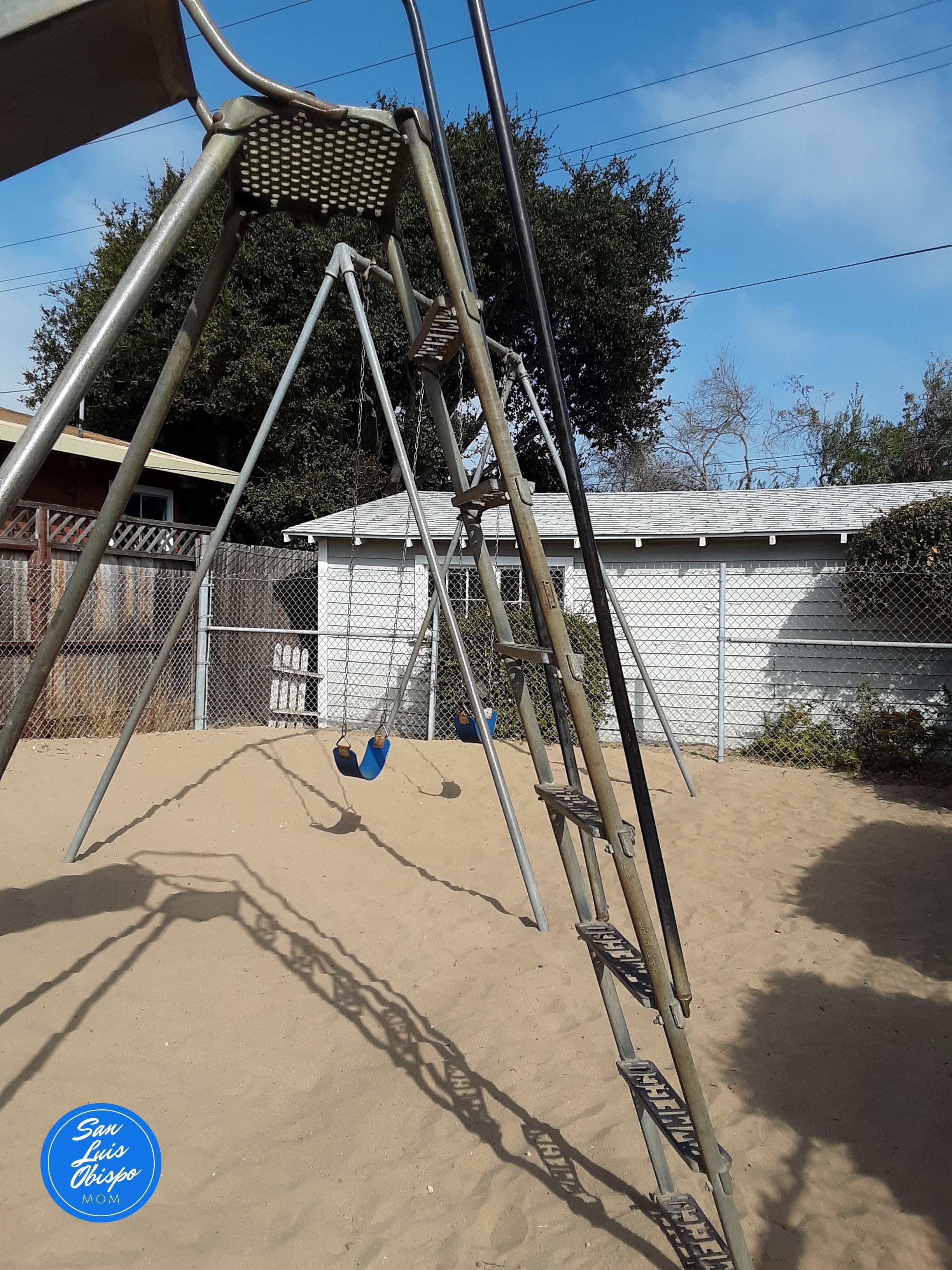 There were also plenty of plastic shovels and toy buckets you can borrow from the main check-in cabin for the kids to play in the sand with. That was a nice surprise for us. We also saw that there were horseshoes that you could borrow for the grown-ups to play with and even DVD's. Just remember to return them back there when you're done using them.

Inside of the cabin, it felt more like a true cabin compared to the blue exterior of the cabins. Inside, the brown wood of the walls and roof were omnipresent. It was a comforting feeling and truly made our experience much more original. 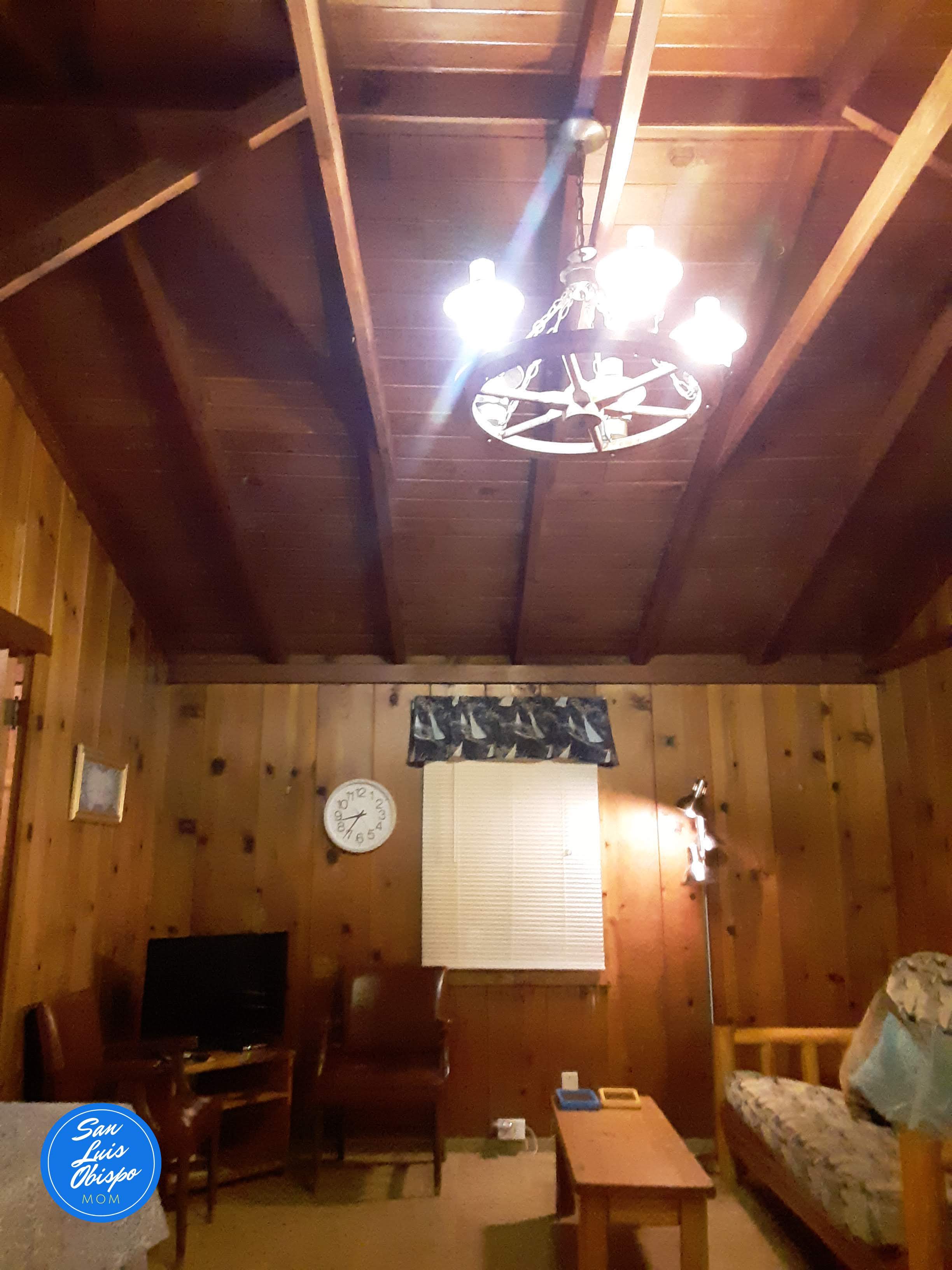 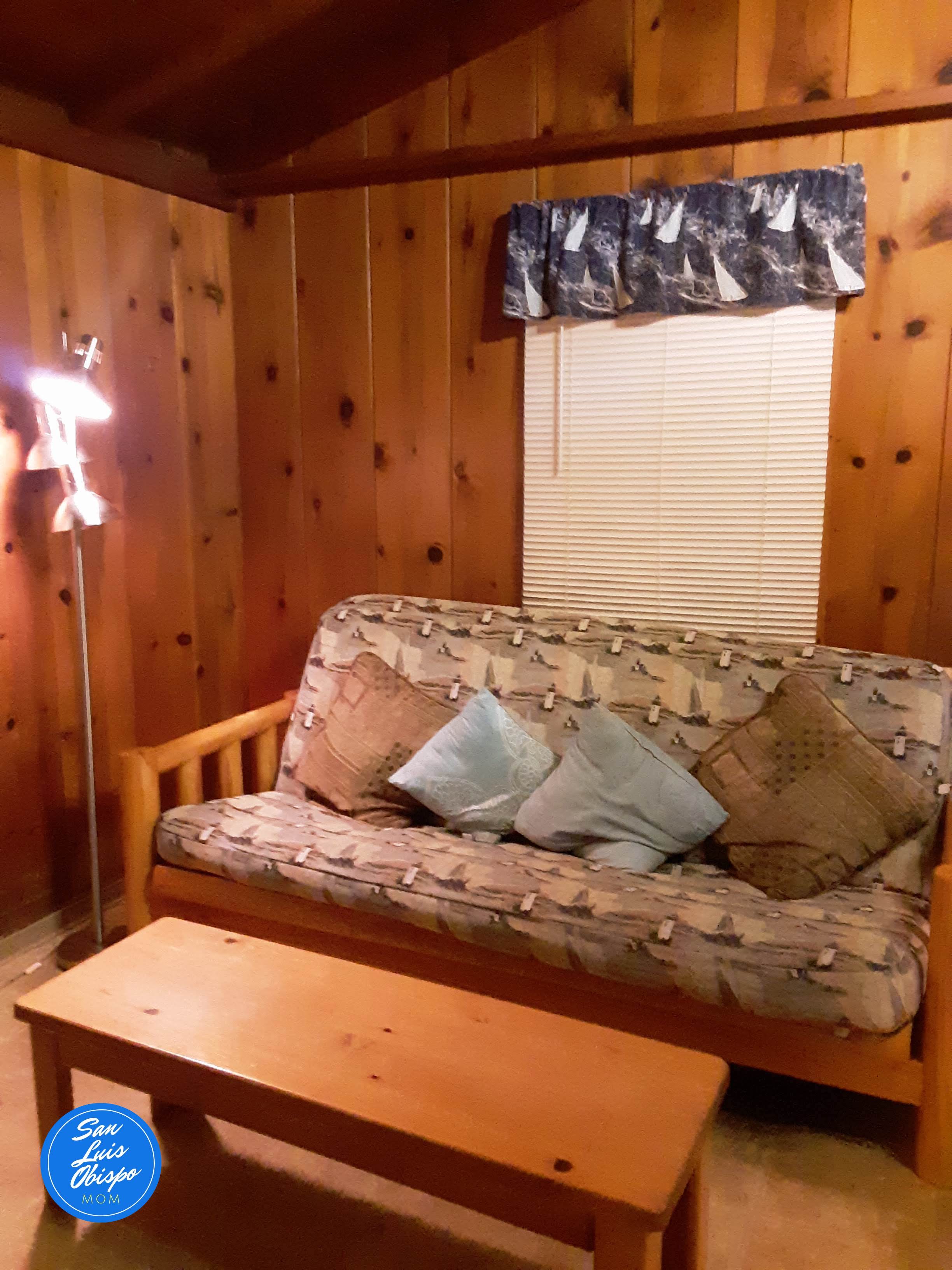 (futon pulls out to become a double sized bed) 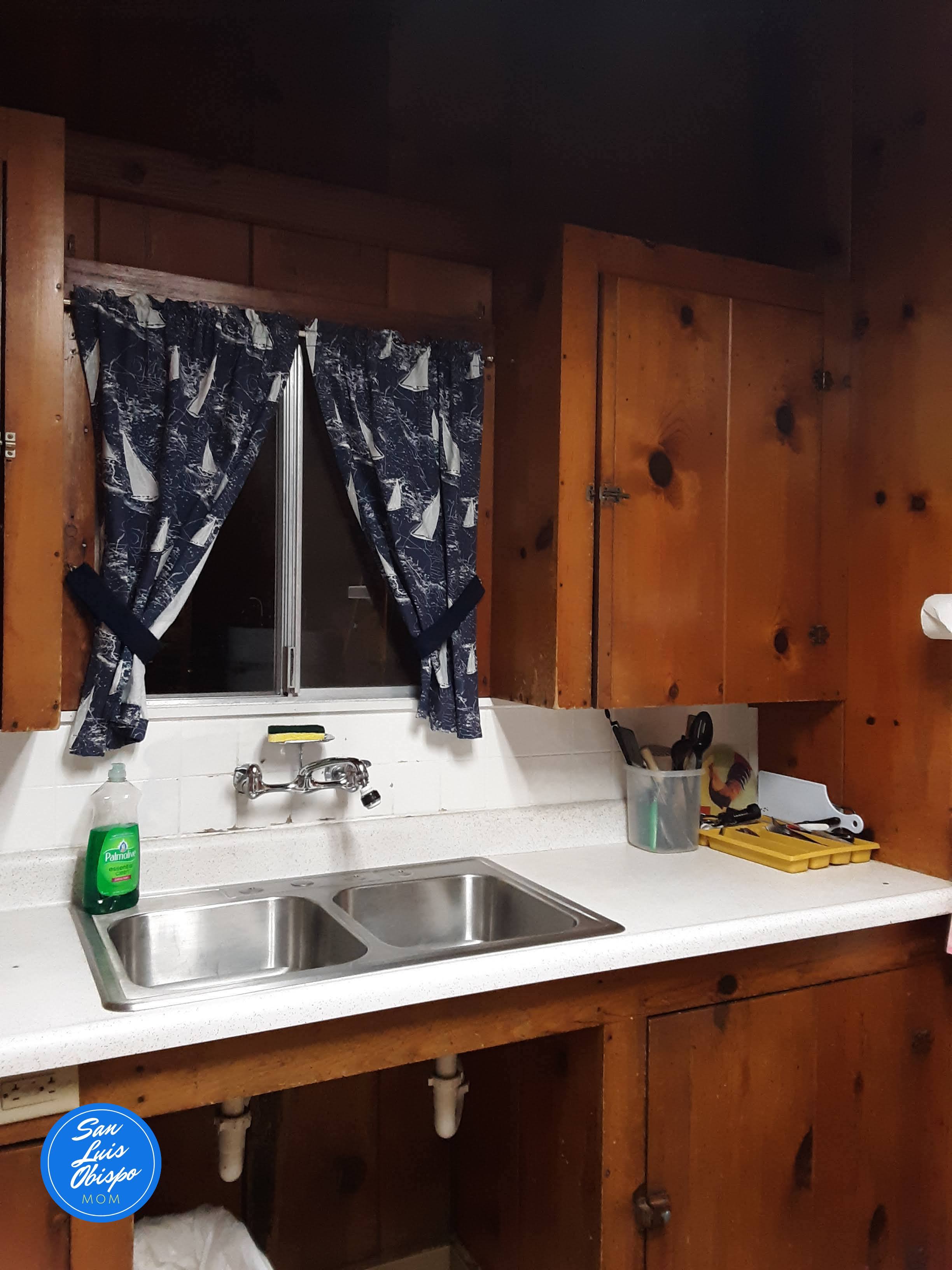 The kitchen was fully stocked with utensils, dishware, pans and even a wine bottle opener and of course, for loaning, during the stay. We were reminded to wash everything and stow them away at the end of our stay for the next campers to use.

There were also paper towels provided but I also brought my own kitchen towel to use during the stay so that helped me keep the kitchen space cleaner. 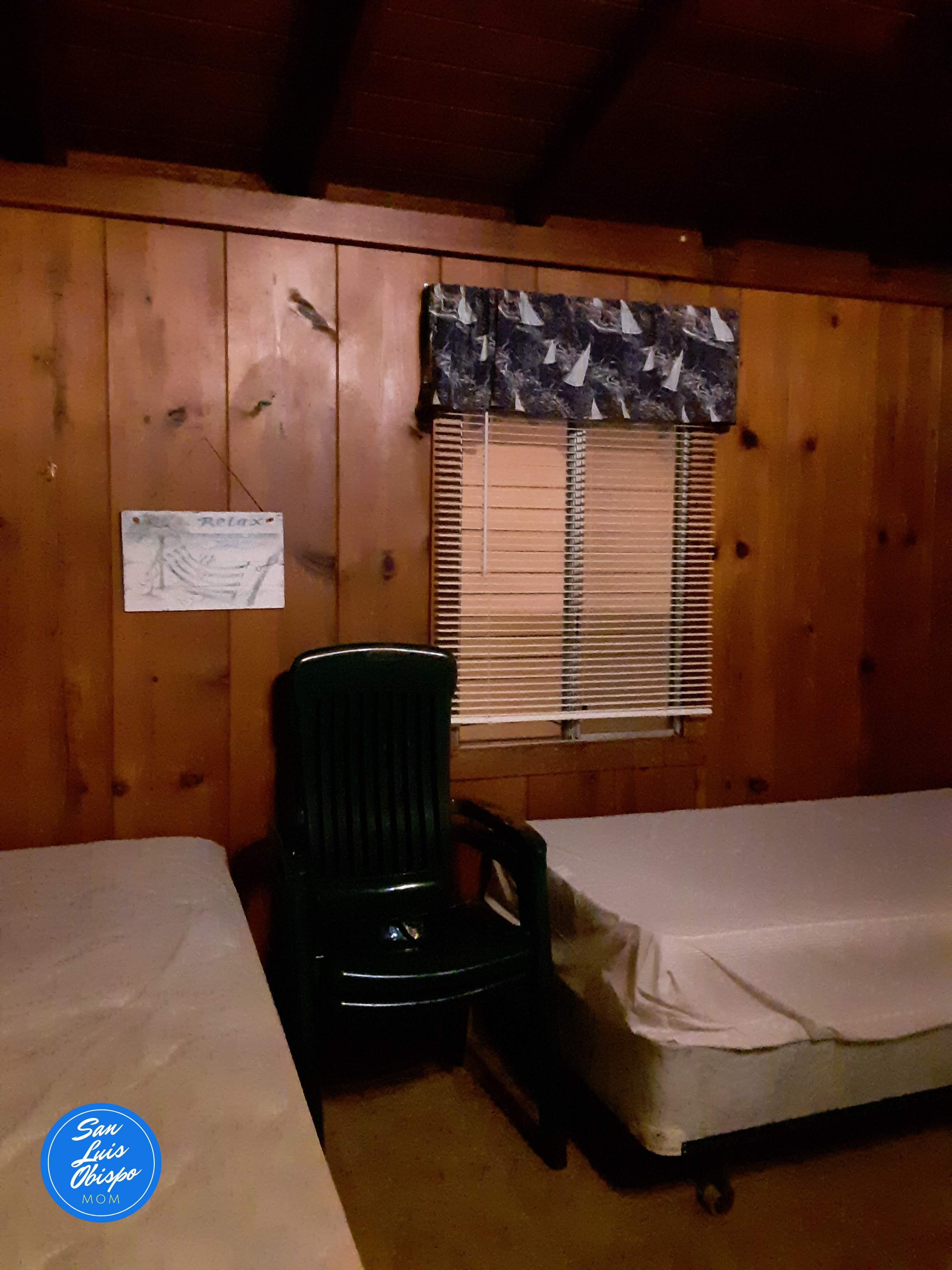 The twin beds were perfect for the kids and with the cold nights, the portable heaters in the room (provided by the camp hosts) were lifesavers to make our evenings more comfortable. There were 2 portable heaters in our cabin: one large and another one smaller. We put the large one in the living room and the smaller one in the bedroom. Remember to bring your own linens, blankets, pillows and bath towels to stay here. You're supposed to bring your own for sleeping and bathing. 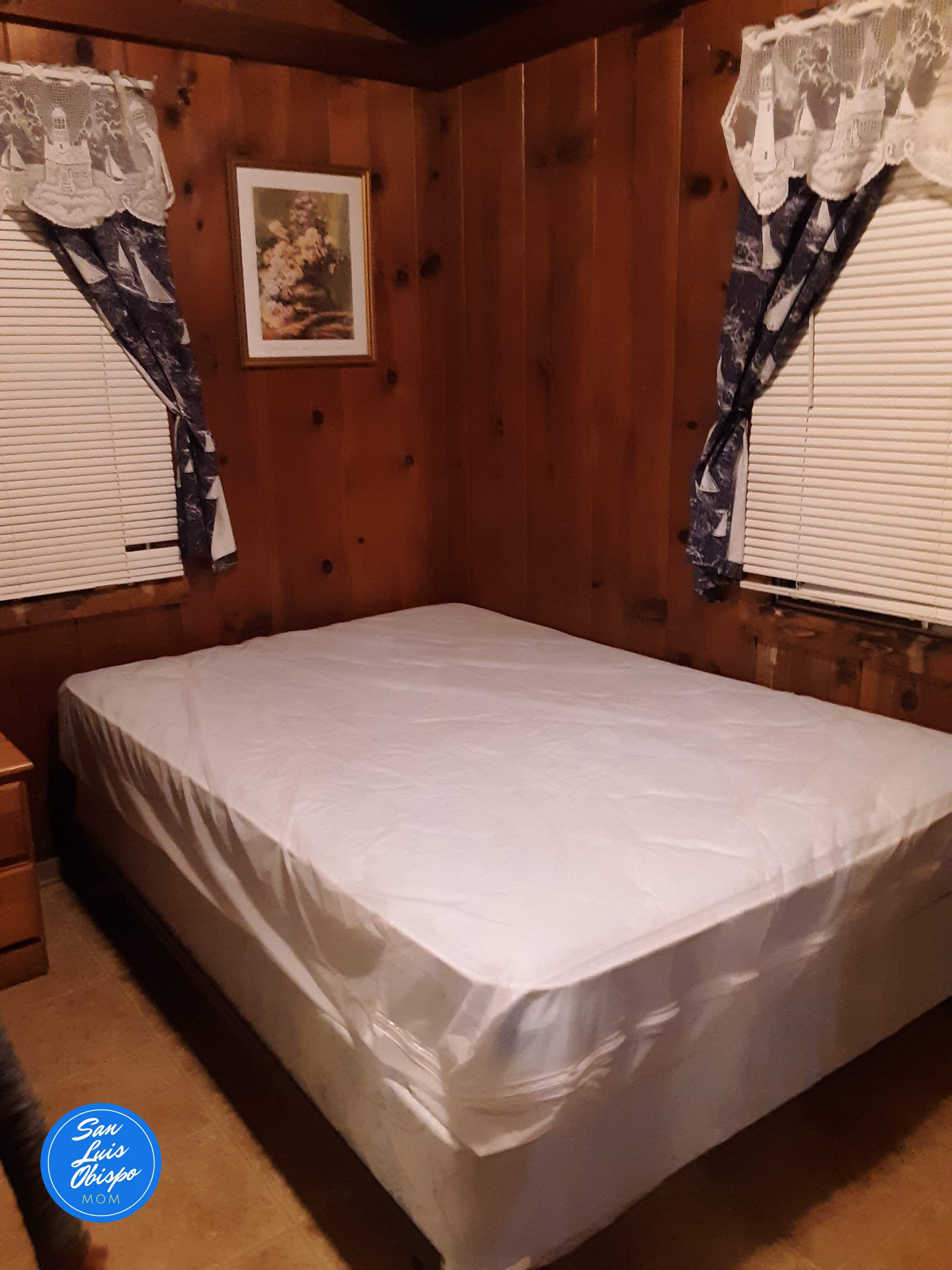 The bedroom has a full sized bed, a dresser, nightstand and also leads to the bathroom. There is only a shower and no bathtub. 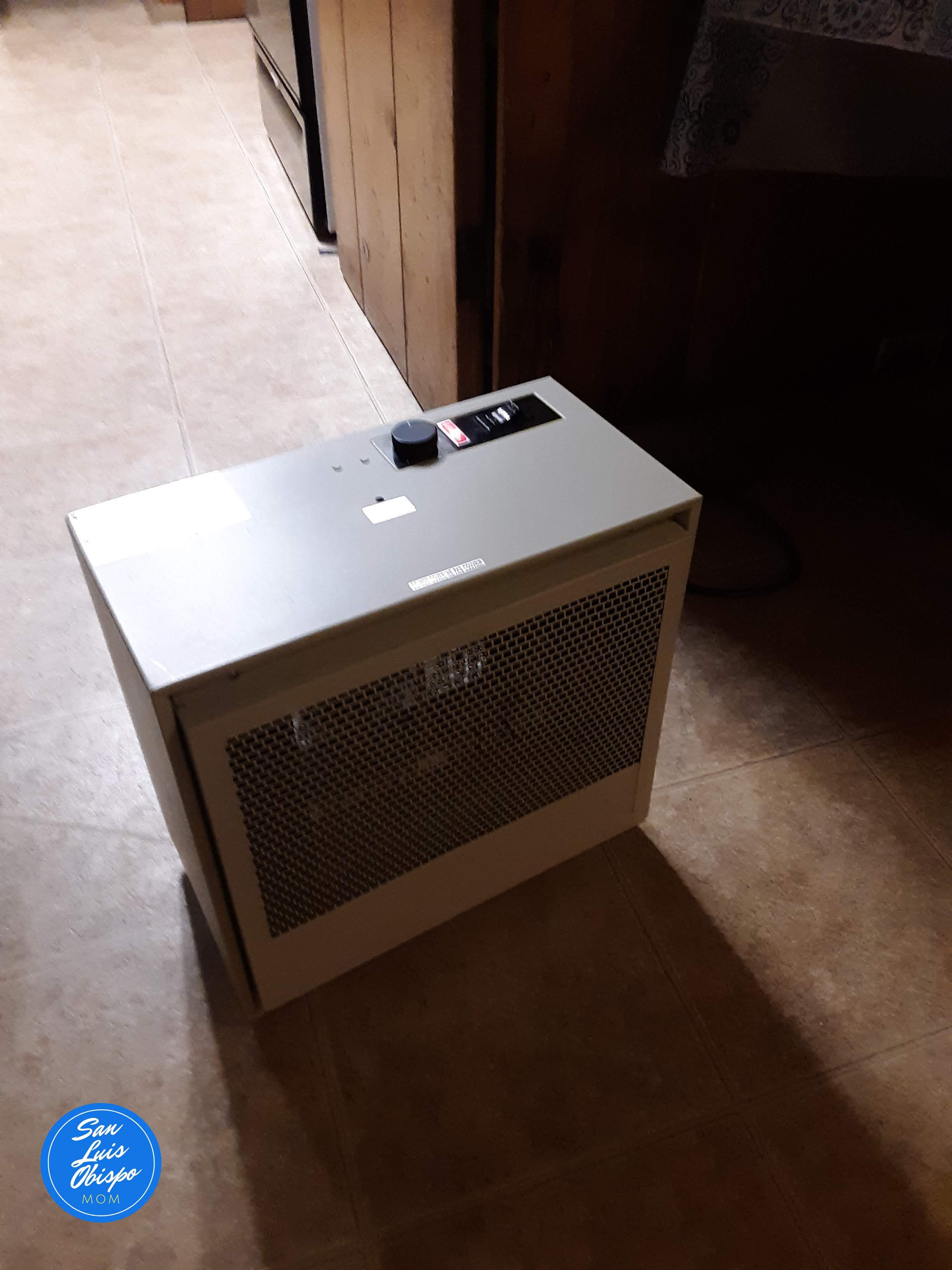 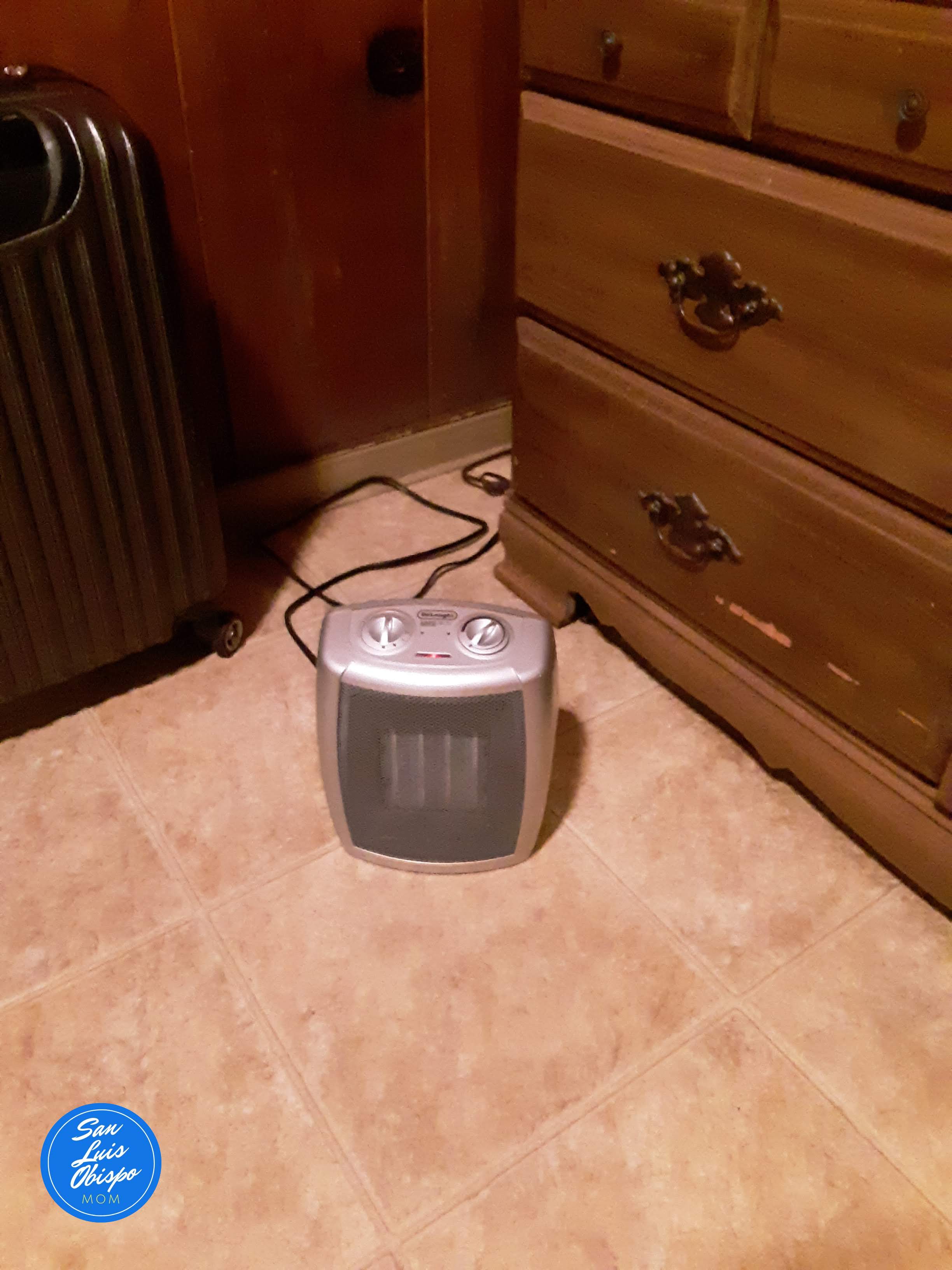 Even though they had a Santa Maria grill that I could use, it seemed like a big task to heat charcoal in there for just roasting marshmallows and one of my goals during this cabin trip was making s'mores for the kids. I opted to experiment with the oven instead, using one of the pans that's already provided in the cabin. 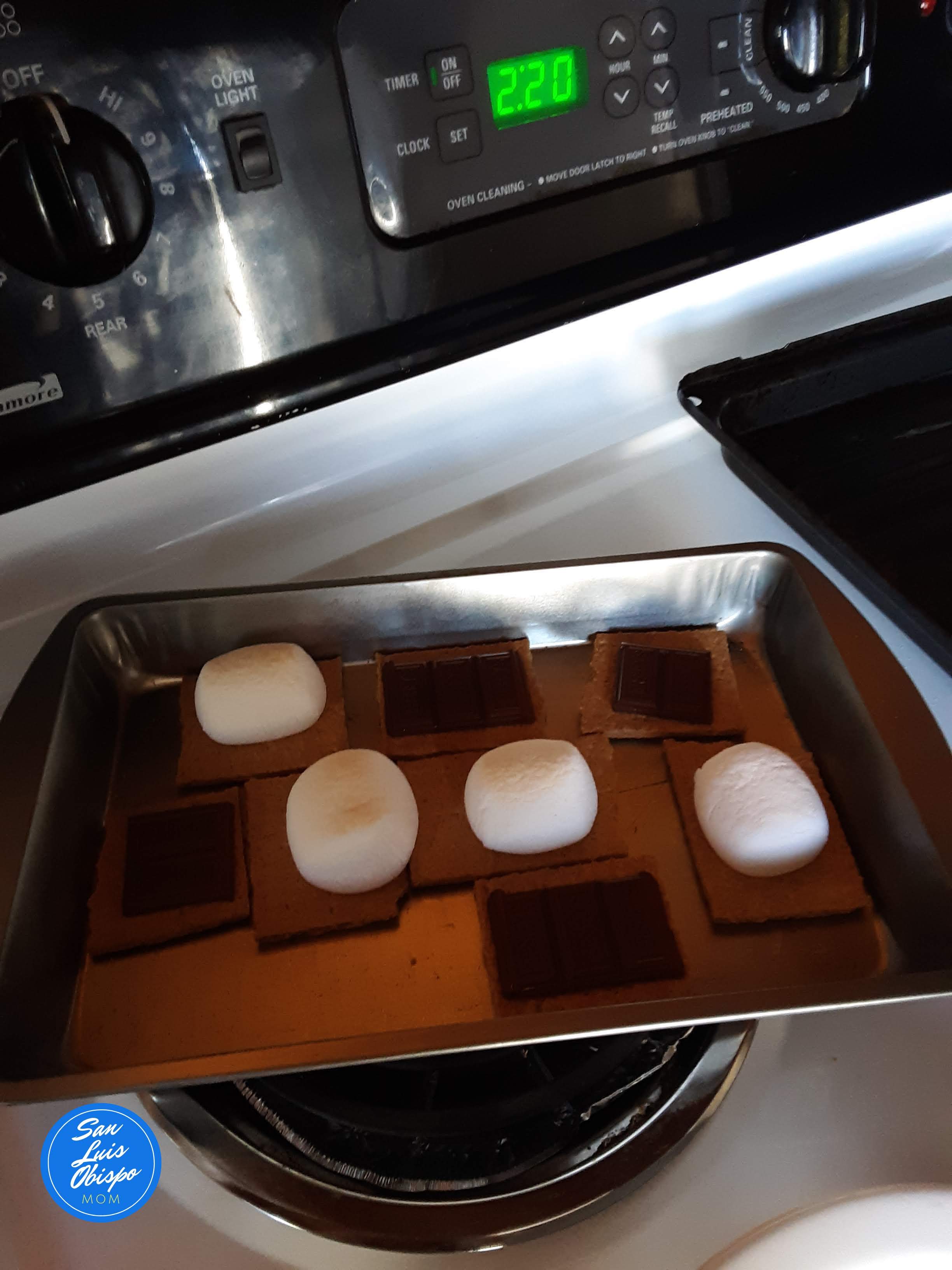 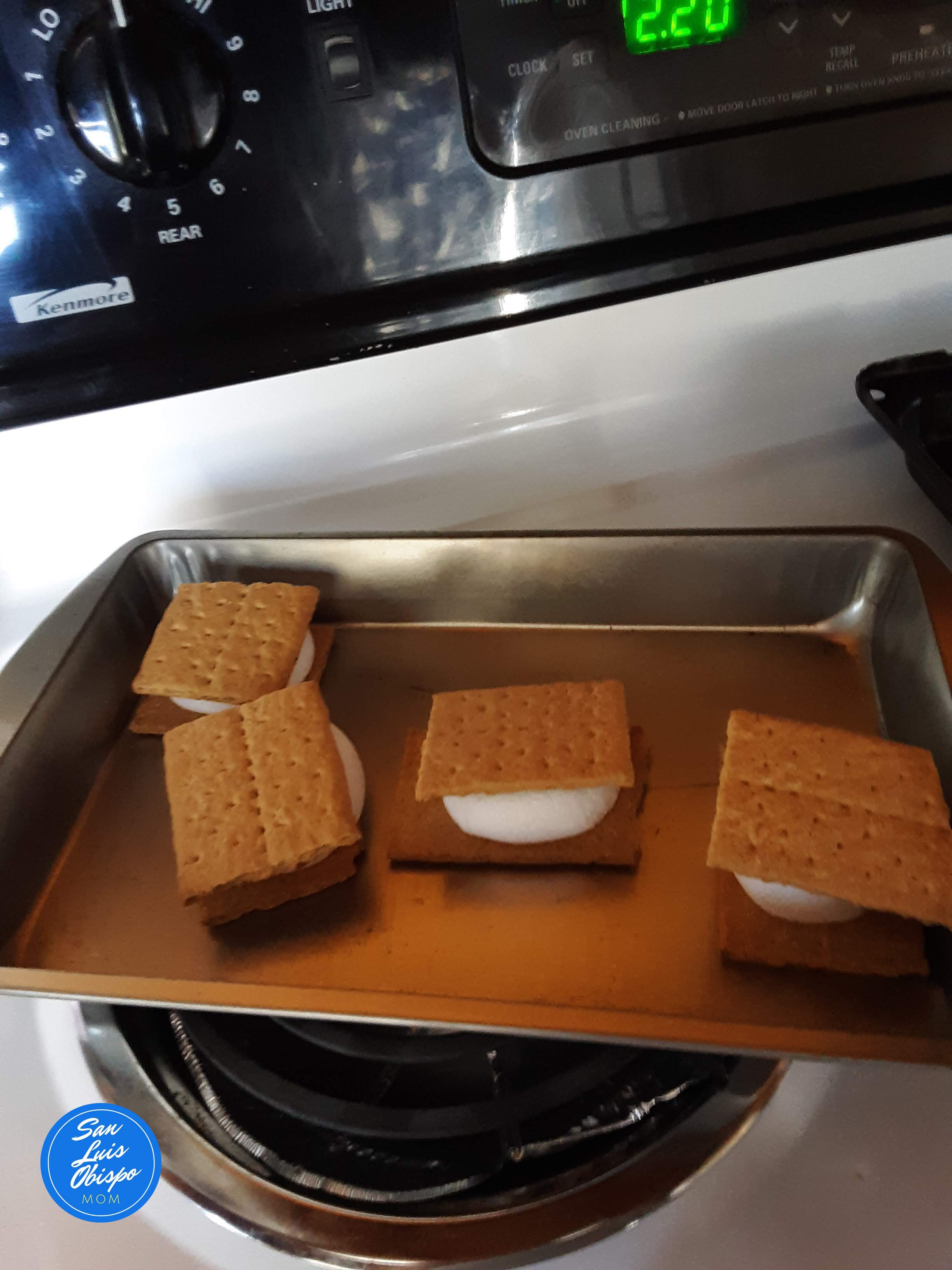 It turned out pretty good and the bonus is it helped warm up our cold cabin as it was about to get colder. 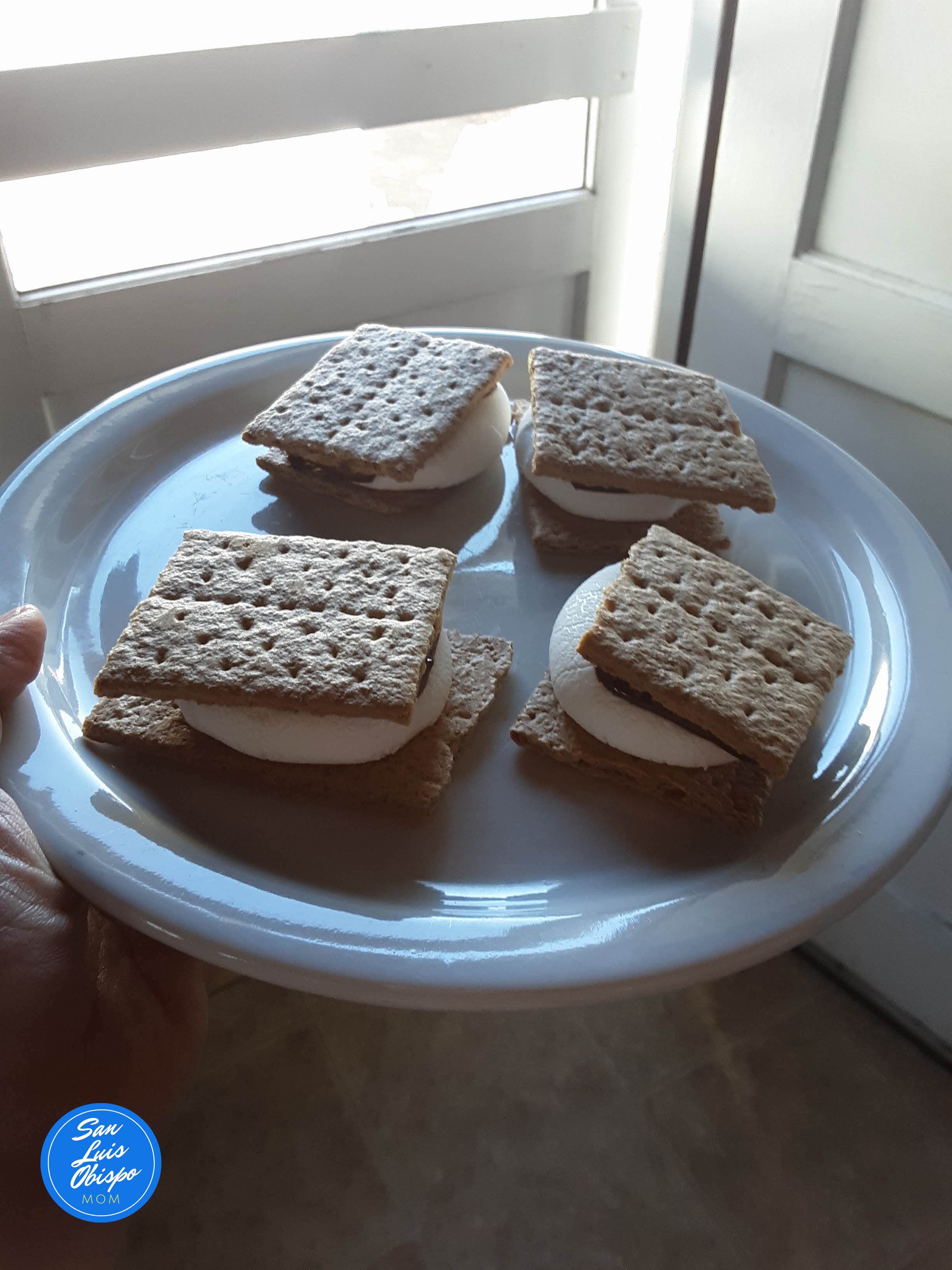 The first night at our cabin was tiring for the kids and my husband since our 2.5 hour drive to Monterey from SLO was right after school and work. My husband fell asleep around 8PM and one of my kids fell asleep around 9PM. So I opened a can of beer and sat next to my older son on his twin bed while he was on his tablet. It was a nice, relaxing first night at the Camp Del Monte. 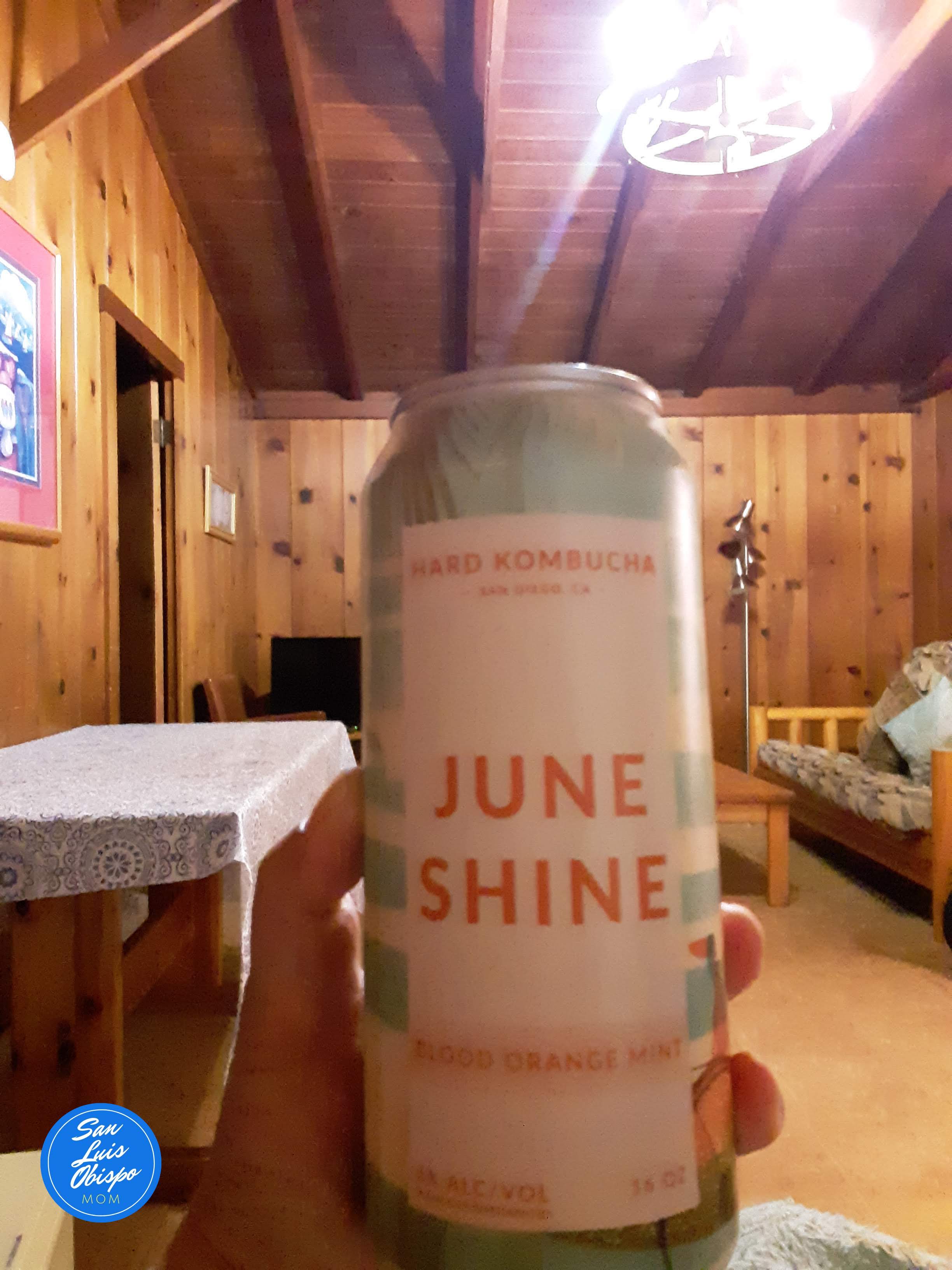 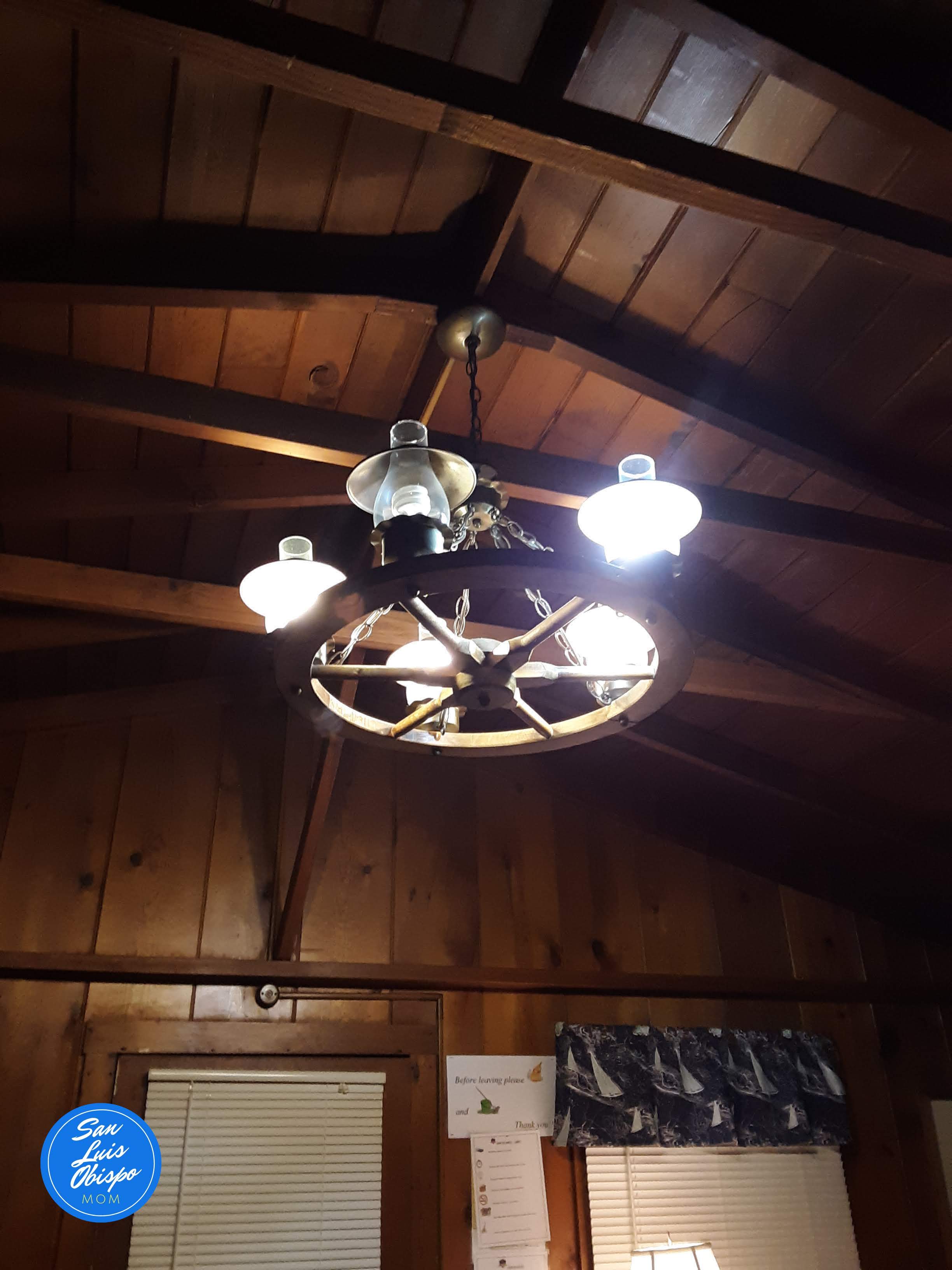 I sat there staring at the chandelier for a while. Even though one of the lightbulbs went out, I really liked it. It gave me inspiration for making something like that out of old parts of unused furniture.

One of our main things on our itinerary was going to the Monterey Bay Aquarium. (See pictures that I took of Monterey Bay Aquarium on IG.) We found a corporate discount rate from the PSEA website for PG&E workers and my husband's ticket was also free because of Veteran's Day weekend. The aquarium was giving all veterans a free ticket that particular weekend in honor of the holiday. That was a very nice promotion for our family.

However, we also stayed in our cabin for a good amount of time during our trip since it was so cold outside and watched some Disney movies that were on TV. We watched Finding Dory, Mulan, Captain America, and more from their TV. 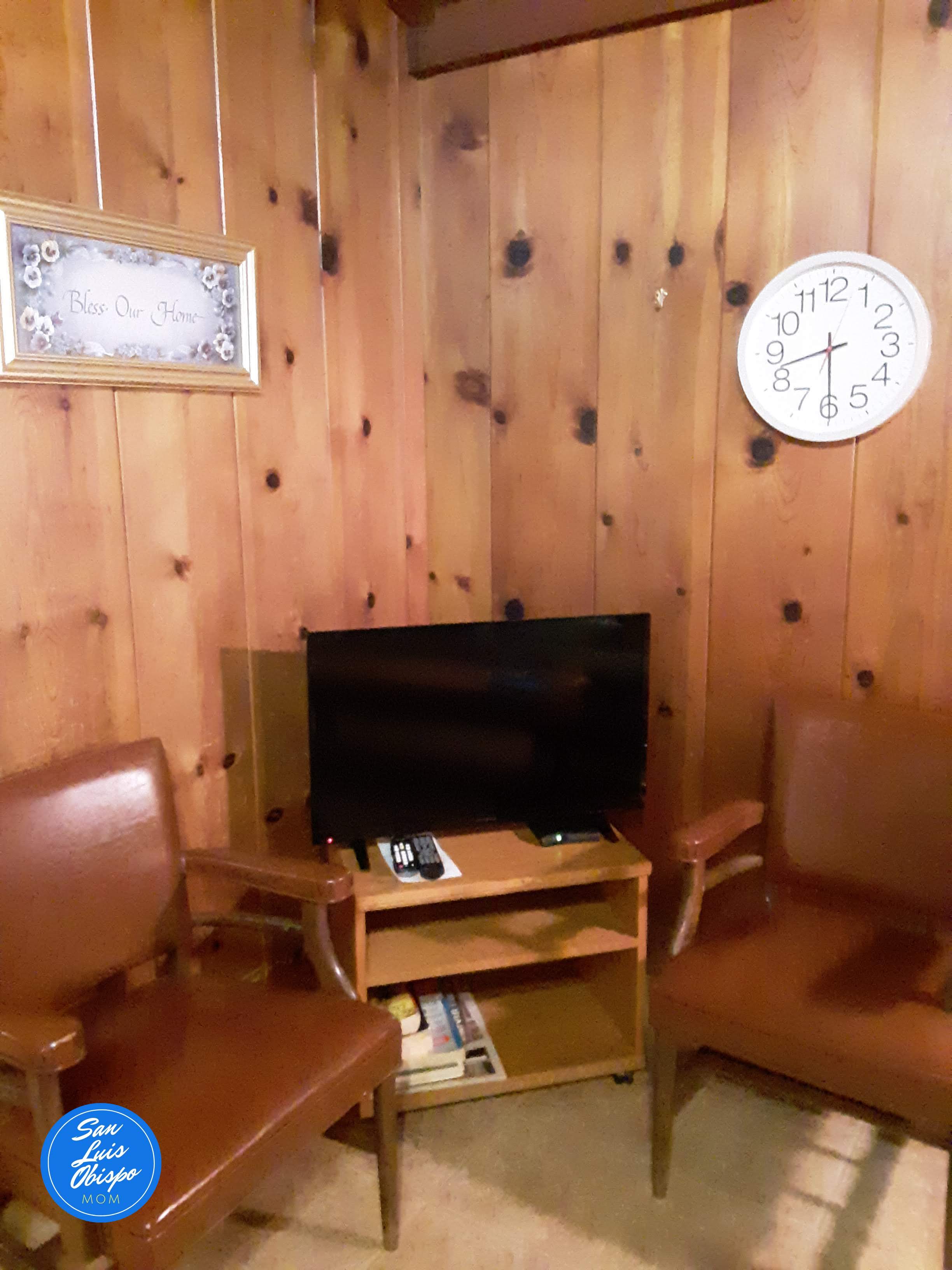 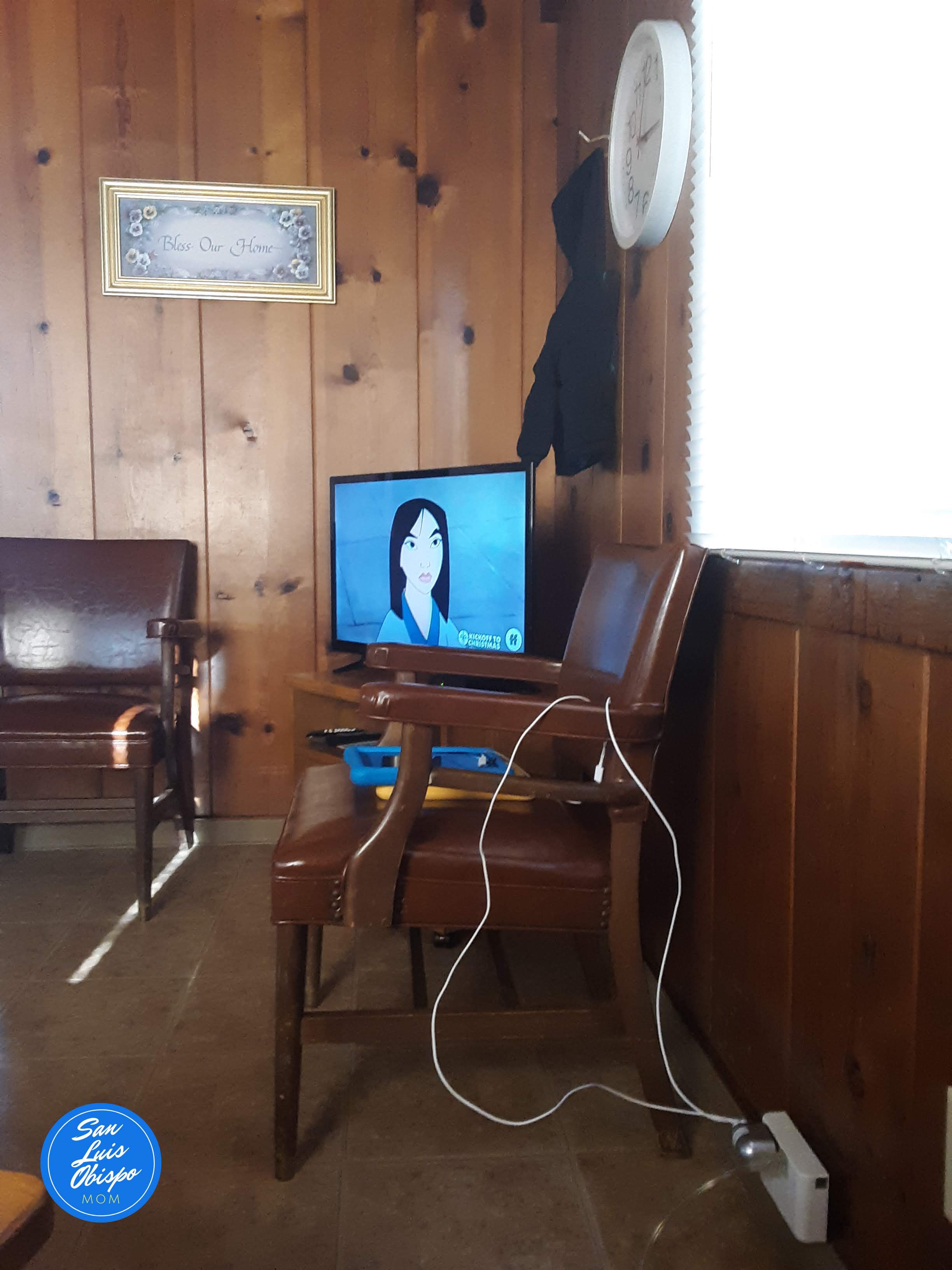 After coming here, there are a few things I would do differently. We opted to eat out for breakfast instead of cooking but I felt that it would have been much easier and enjoyable if I had cooked in the cabin for most of our breakfast morning because it had been harder to get my 3 year old to sit still in the restaurants during this particular trip. Even if he grew up in a couple of years, I think it would still be nice to stay in our jammies through the late morning and just chill there and eat in the cabin. It has all the cooking utensils you need and since the groceries were just a couple of blocks away, it would have been easy to get a carton of eggs, a package of bacon, a loaf of bread and bag of potatoes for our stay. 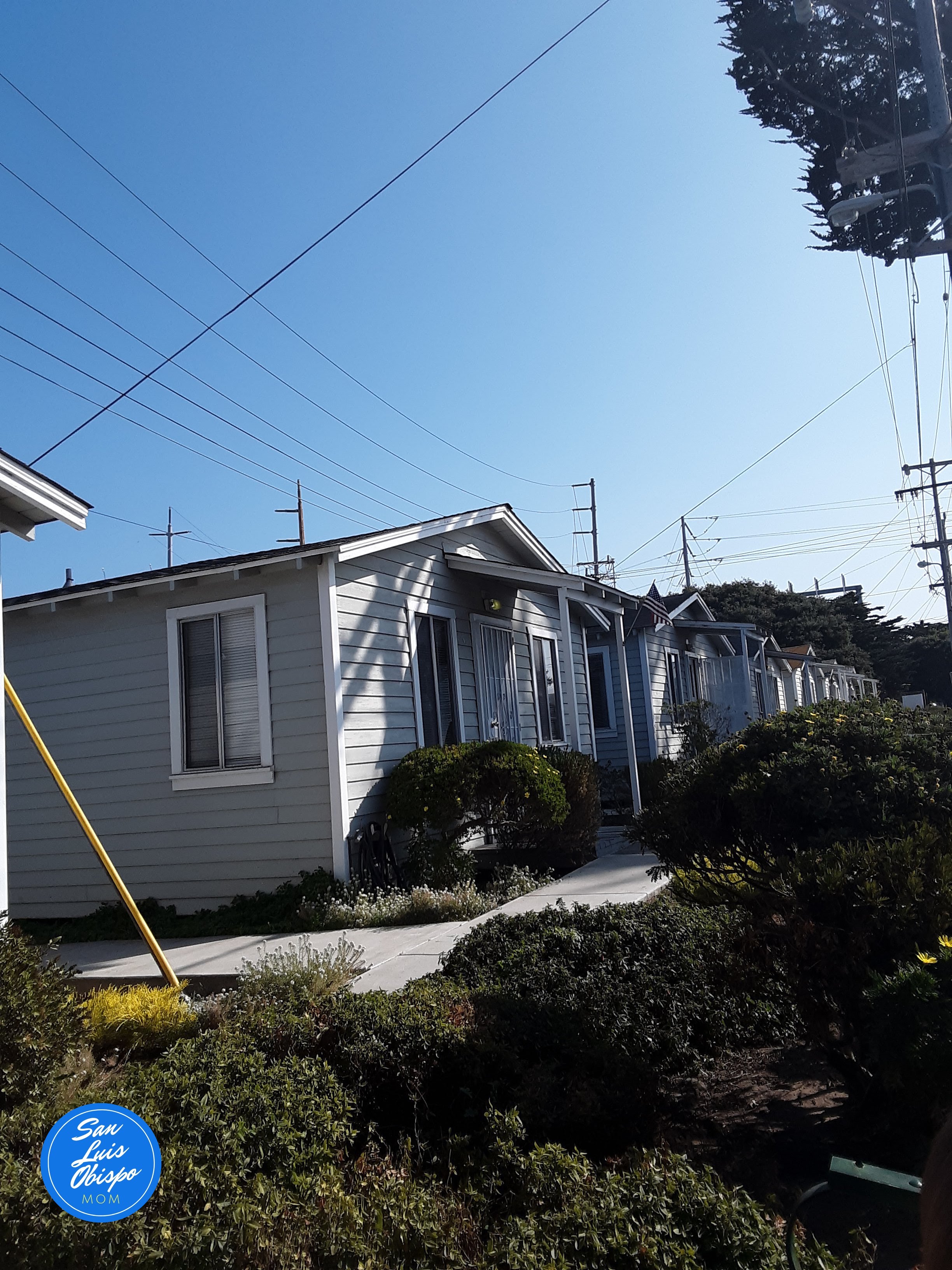 (our cabin from the backside)

Looking back, I really enjoyed our cabin stay at Camp Del Monte. It was super kid-friendly and also great for just a group of friends to get-together too. We'll try to get cabin #7 again in a couple years when we return here to Camp Del Monte to enjoy another trip in Monterey and hopefully start a tradition.
Address of Camp Del Monte: 401 Kolb Avenue, Monterey, CA 93940

See my latest and other adventures and blog posts by visiting the blog page: http://www.sanluisobispomom.com/blog.php 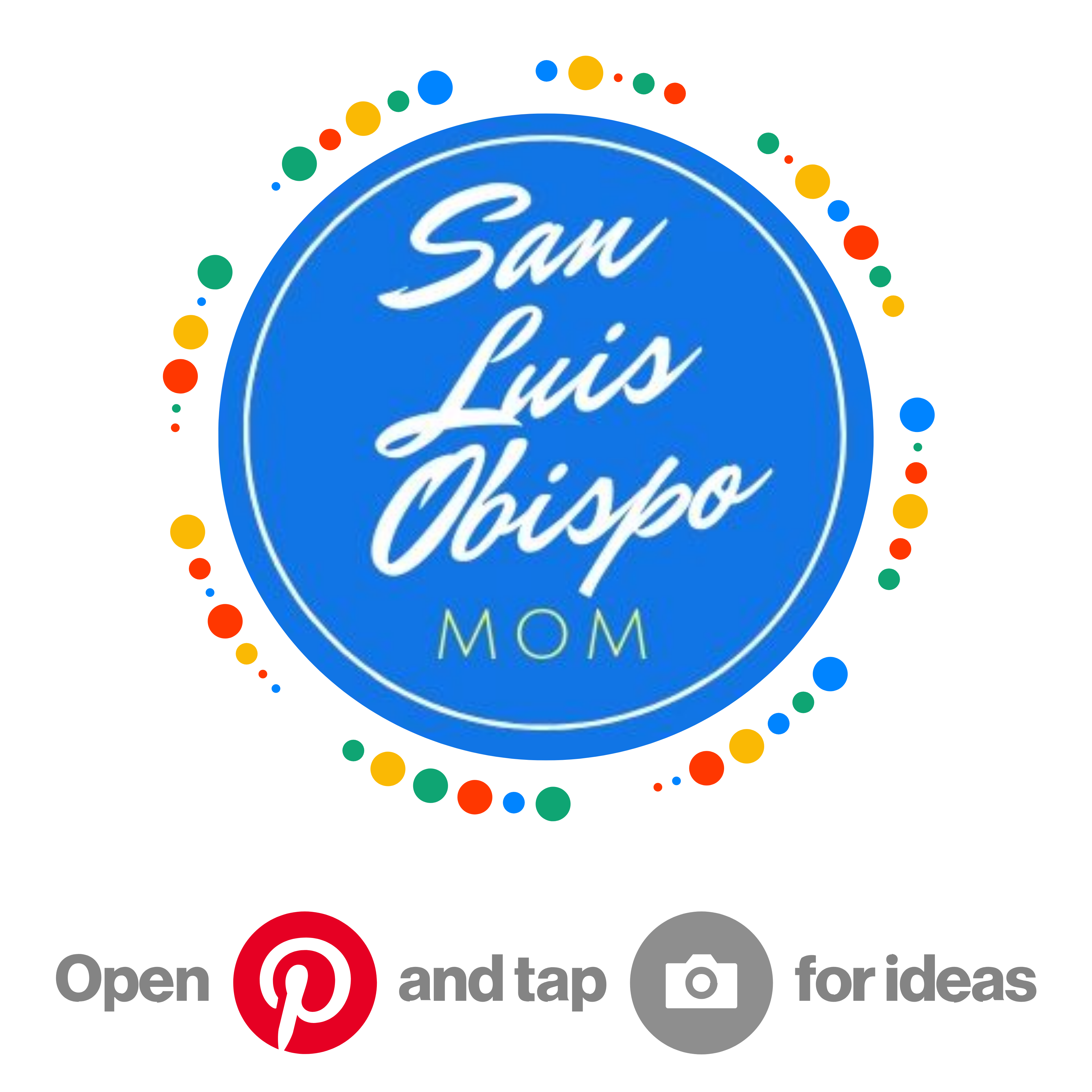