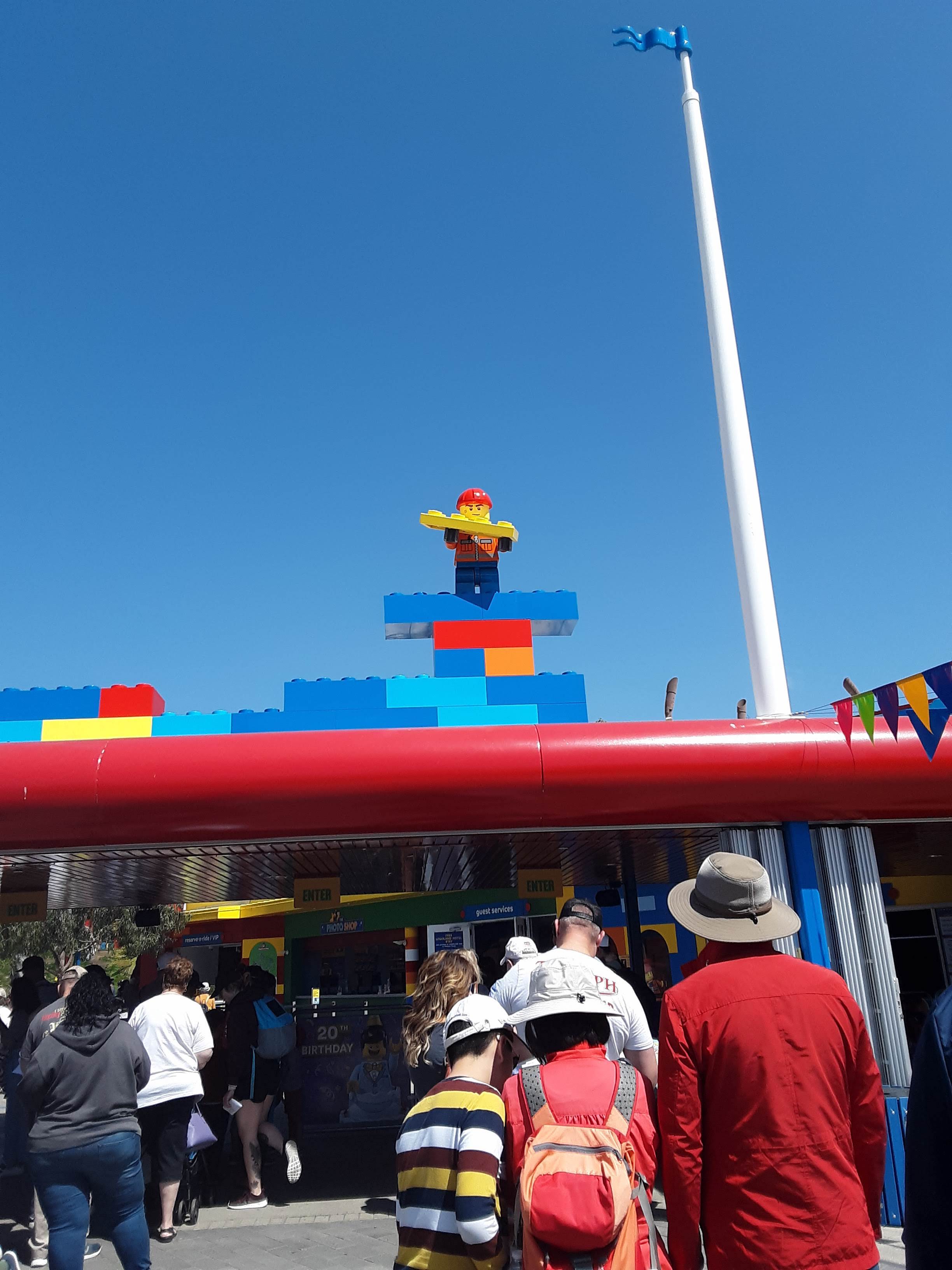 The weather was perfect and the kids had a blast! My sons are 5 and 2 years old. Because my younger son is still just 2, he got in for free at both LEGOLAND California and SEA LIFE Aquarium. We were happy to be able to take advantage of this! The distance from San Luis Obispo to LEGOLAND California is about a 4 hour and 30 minute drive, depending on LA traffic. 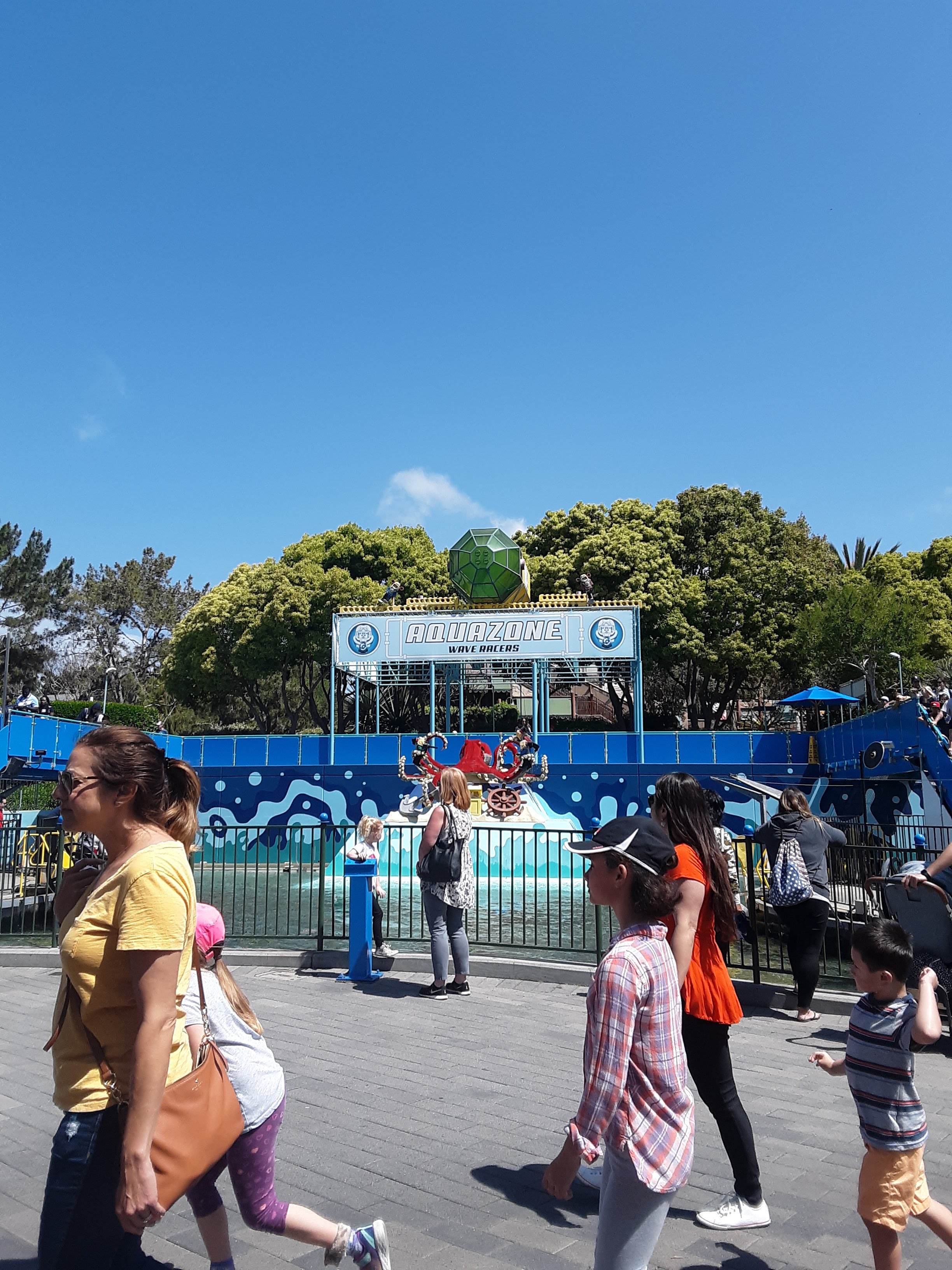 Although I've been to LEGOLAND before, this was both of my sons' first time! They knew about LEGOLAND from watching youtube videos online so when we told them we were taking them here, they were really excited! As we were driving towards the parking gate entrance, they were so happy to see the large Lego figures along the way. Parking is really expensive though. It was $25 just for regular parking per car. I saw a lot of people being dropped off in front so that's something to consider. 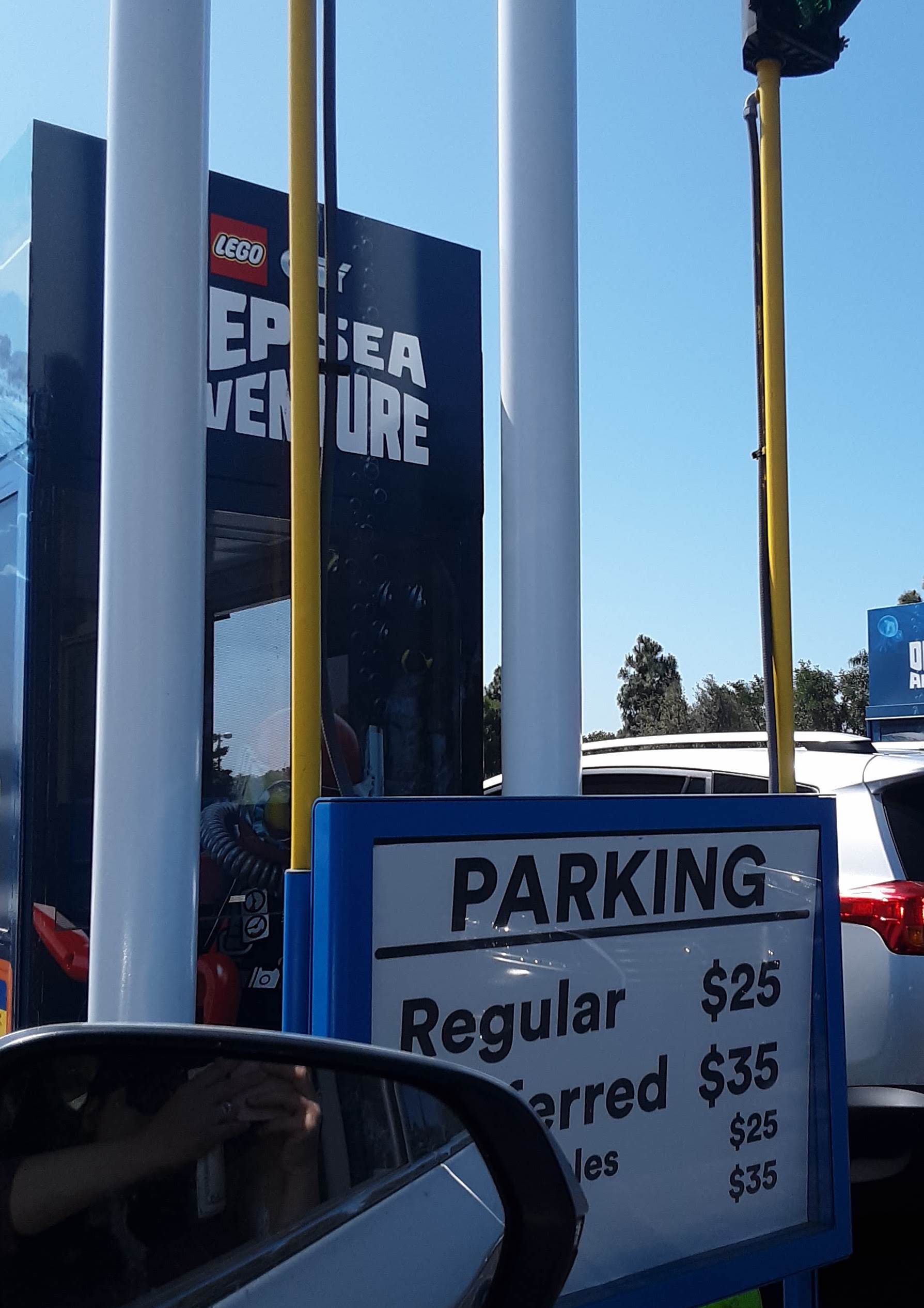 They checked our bags before we entered and that was a quick process. Because we had gotten tickets online ahead of time, we didn't need to go to the ticket booth and went straight to the entrance gate where our tickets got scanned. You can buy online tickets from legoland.com or the aRestravel.com partner site (sometimes cheaper than legoland.com site). If you're a veteran or military family, you can get a really great rate as well from a link through the LEGOLAND California's website. They will need to verify your military status information first. We did the veteran verification and it only took them a minute to send the link to buy the heavily discounted military rate. Link to the military discount page for LEGOLAND tickets.

We arrived at LEGOLAND California around 12:30PM and there were already a lot of people there but the lines went fast. It wasn't too bad! I think all the spring breakers went home already. There were some rides that my 2 year old couldn't get on so we would skip those and looked for the ones where the minimum height were either 36" or with no minimum height required. There were over a handful of rides that we were able to get on even though my little one is only 36 inches! We went on Cargo Ace, Fairy Brook (twice), LEGO CITY: Deep Sea Adventure, LEGO Ninjago the Ride and Lost Kingdom Adventure. There were a few other rides that my little one could get on too but we ran out of time! My kids also enjoyed the free video game rooms and multiple Lego building stations all around the park! In between rides, we would also take pictures with the LEGO stars who would be at photo opportunity spots. We got to meet Emmet! There are also games you can play to win prizes like this one below. 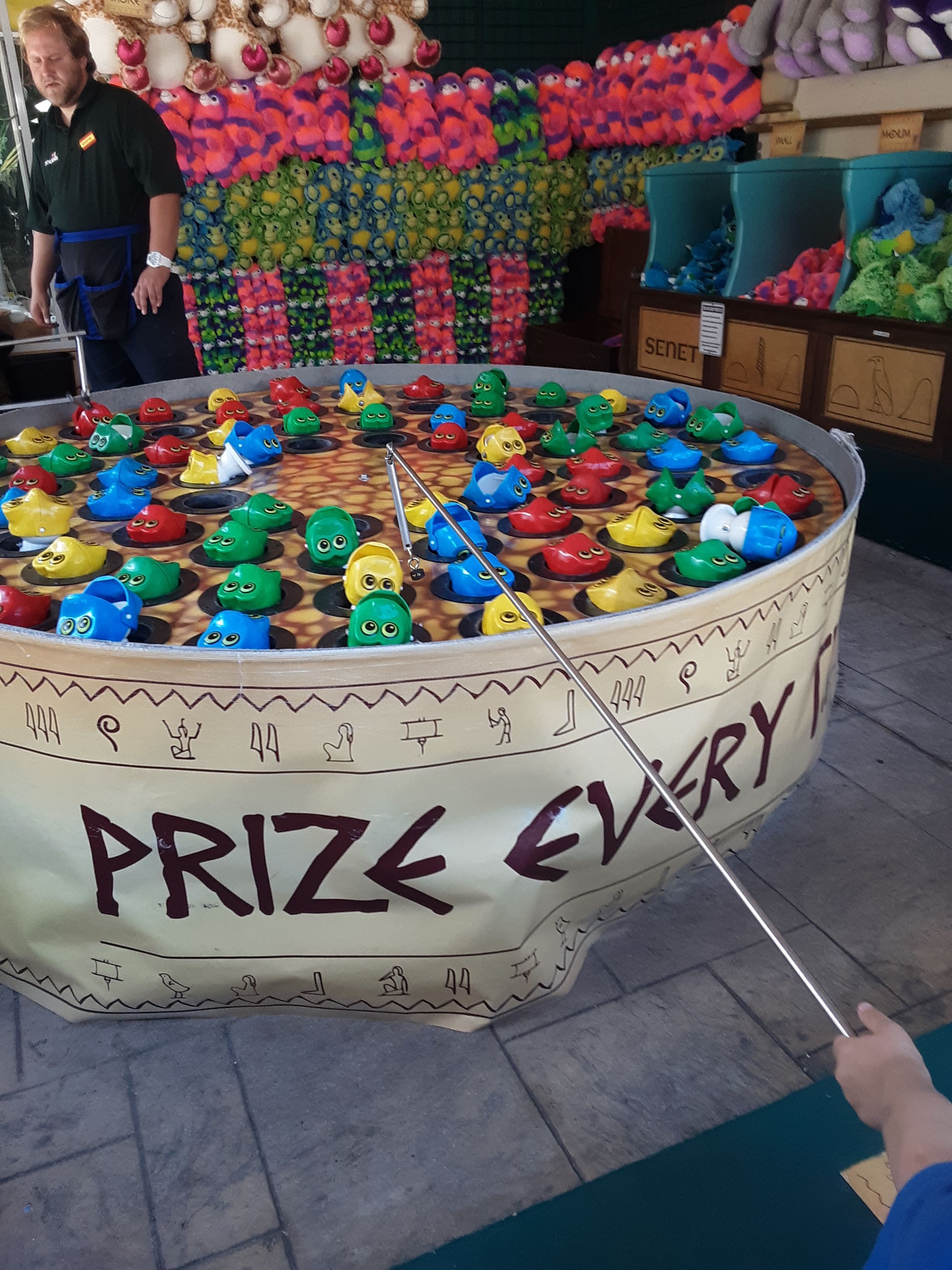 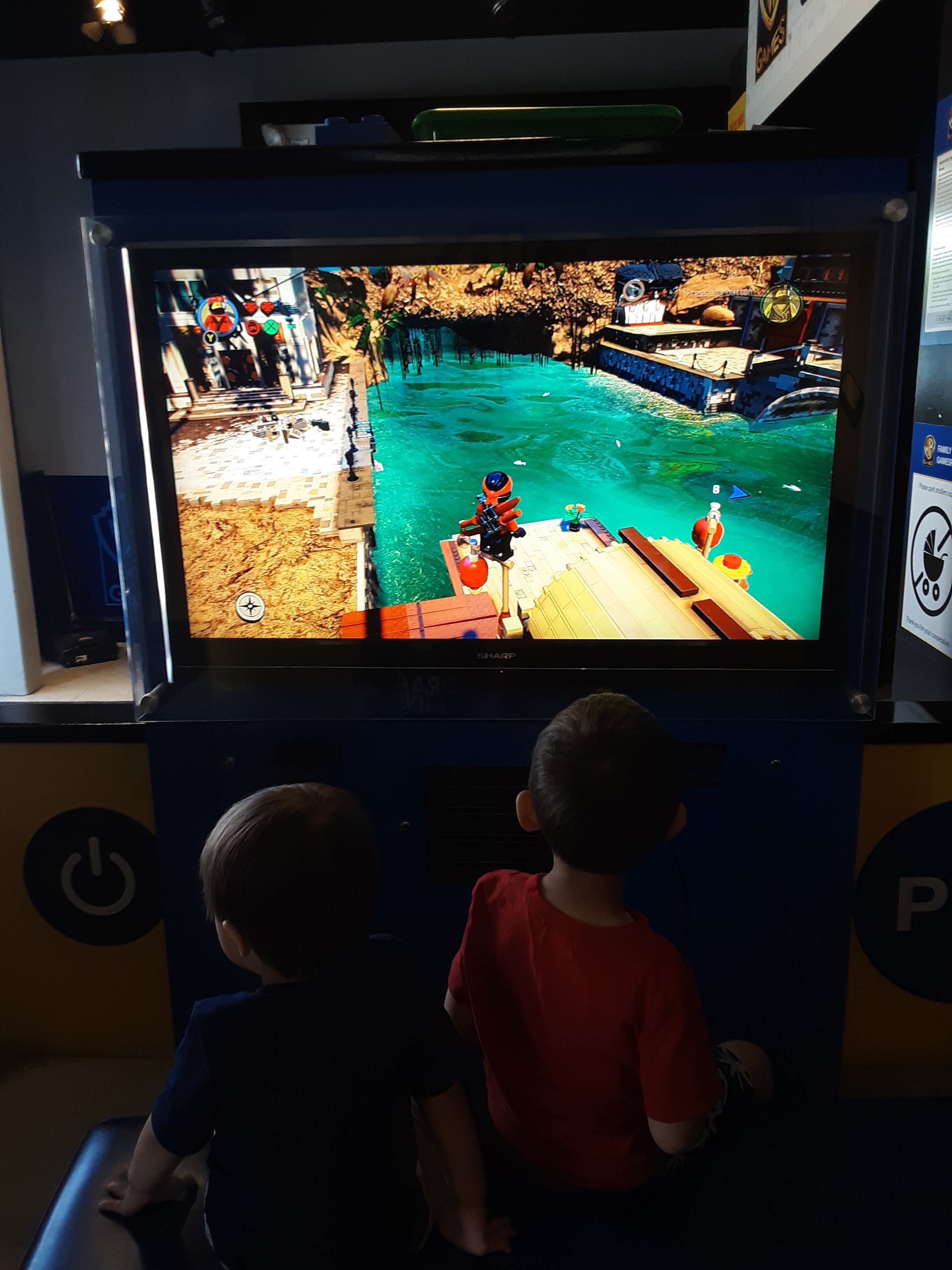 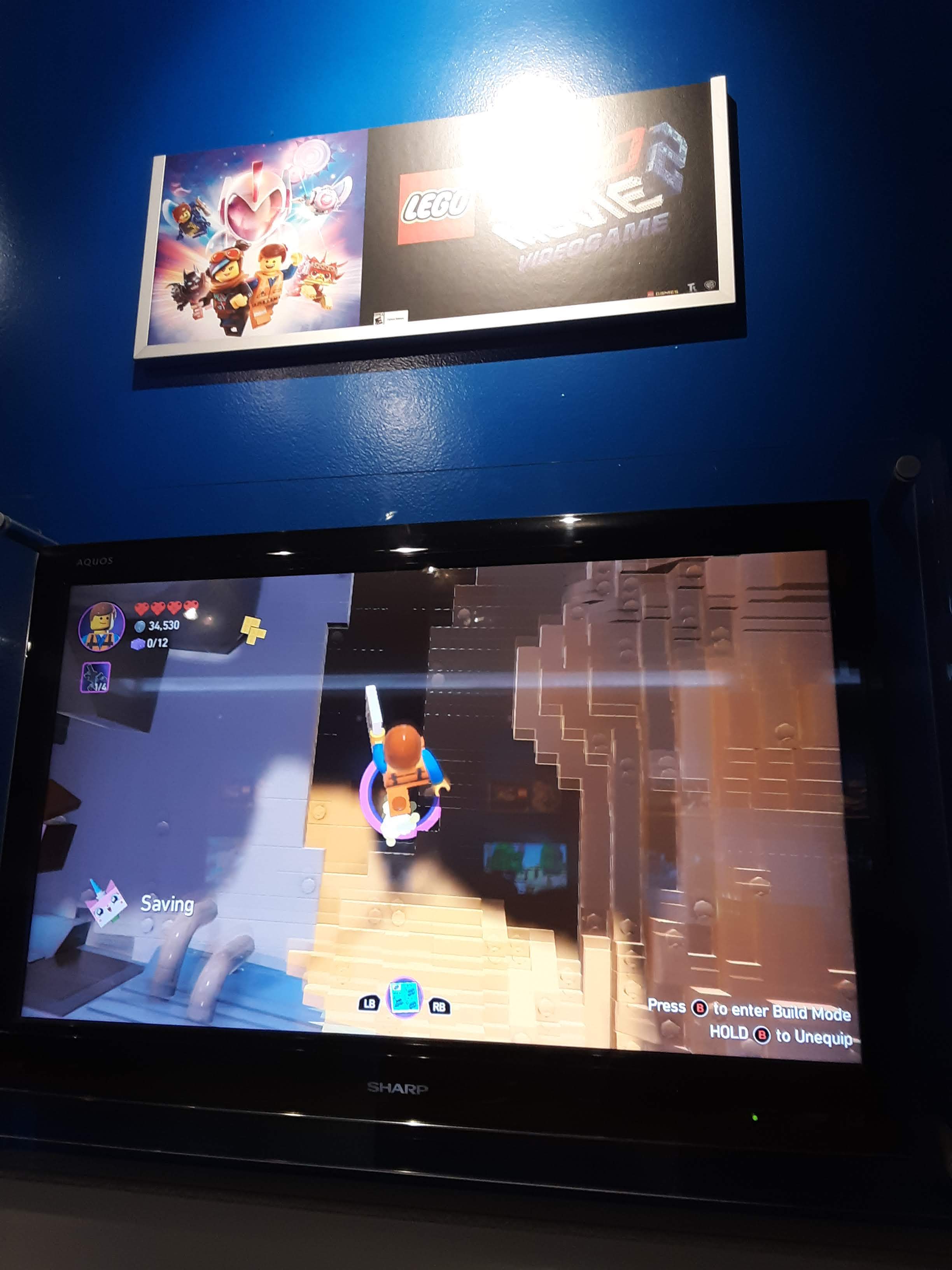 I think what made this experience at LEGOLAND even more special to our boys is because they've been playing with Legos ever since they were big enough to start playing with toys. My 5 year old has been building things from Legos for a few years already and it's a thrill for us to watch their eyes light up and laugh with glee as they go on the Lego themed rides.

The last time I was at LEGOLAND was about 8 years ago (no kids yet) and seeing how much this park has grown since then is wonderful! There are more rides, now 2 LEGO hotels right in front and more dining options. For lunch, we ordered a pizza from Pizza Mania. It's fast and you sit outdoors under the patio to eat and then continue on with your adventure. For dinner, we decided to go for more pizza but this time at their Pizza and Pasta Buffet. It was $18.99 per adult and $9.99 for children under a certain age. It was pricey but it was fast and easy. They had a salad bar included as well. The soft drinks were included in the pricing too. We were bummed out that Wok and Bowl Ramen was closed on the day we went but hopefully the next time we visit, it'll be open.

We definitely made a stop at Miniland USA and saw all the cities built out of Legos! Notable ones for us were San Francisco and Las Vegas, among many! 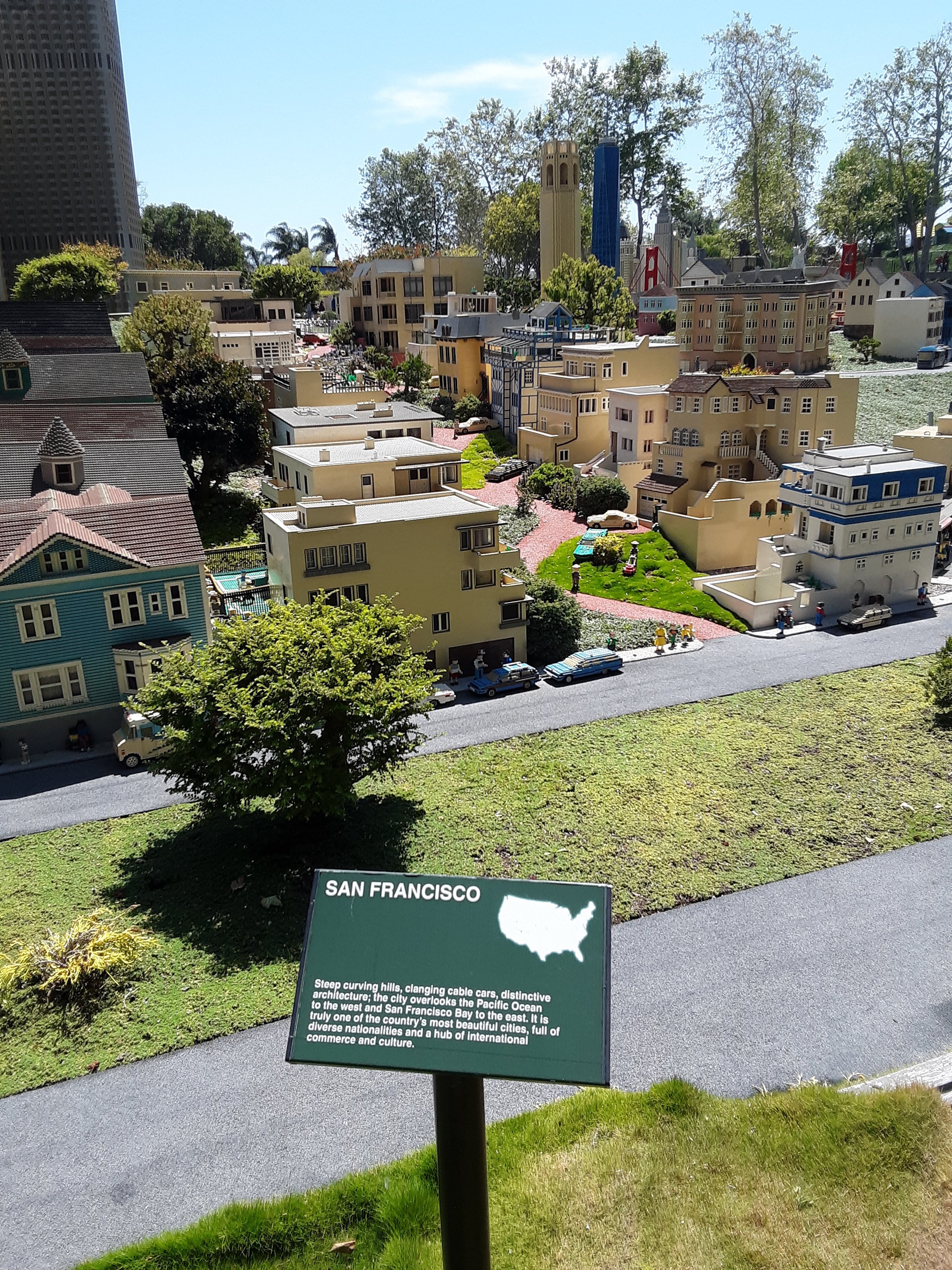 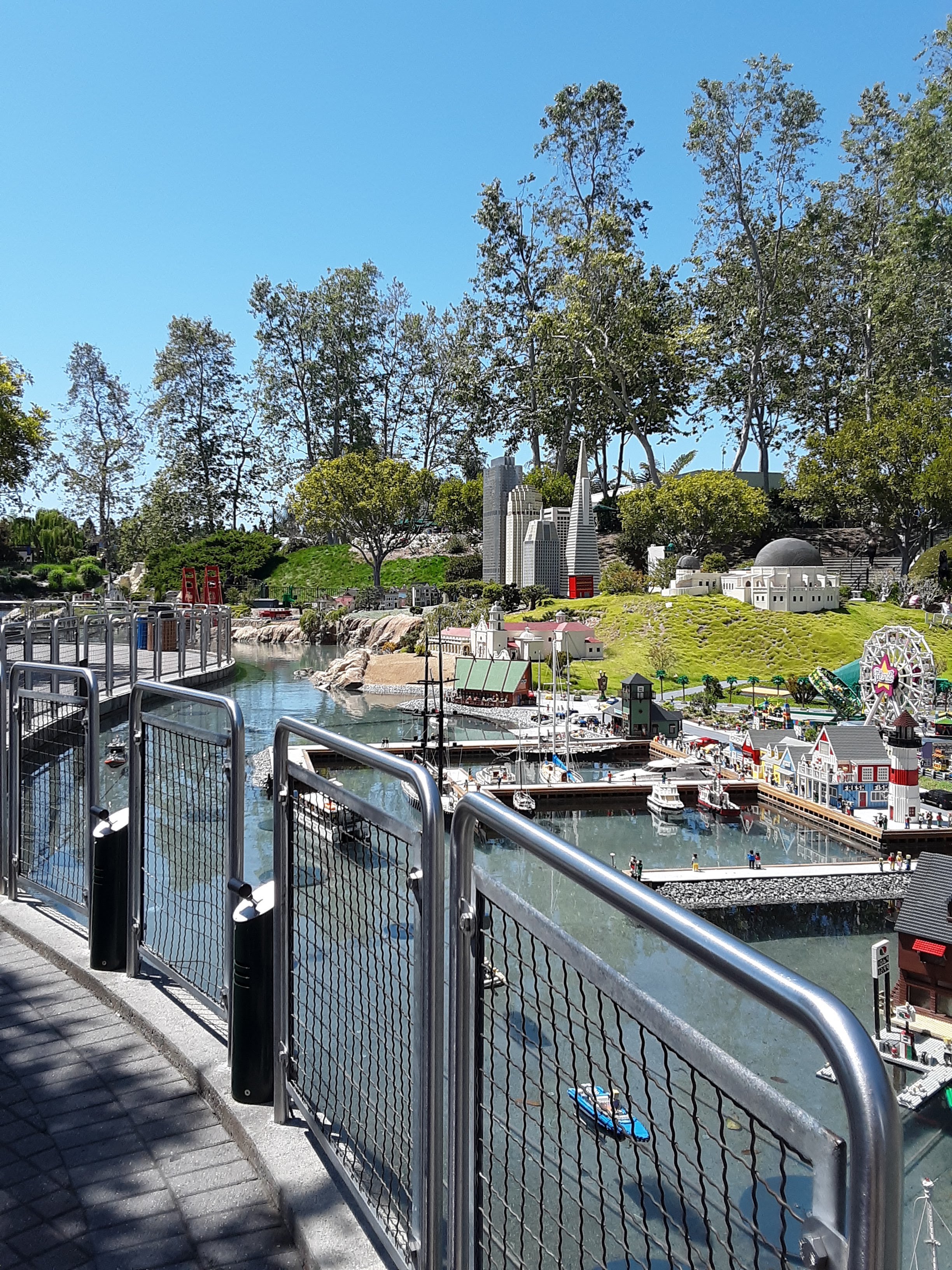 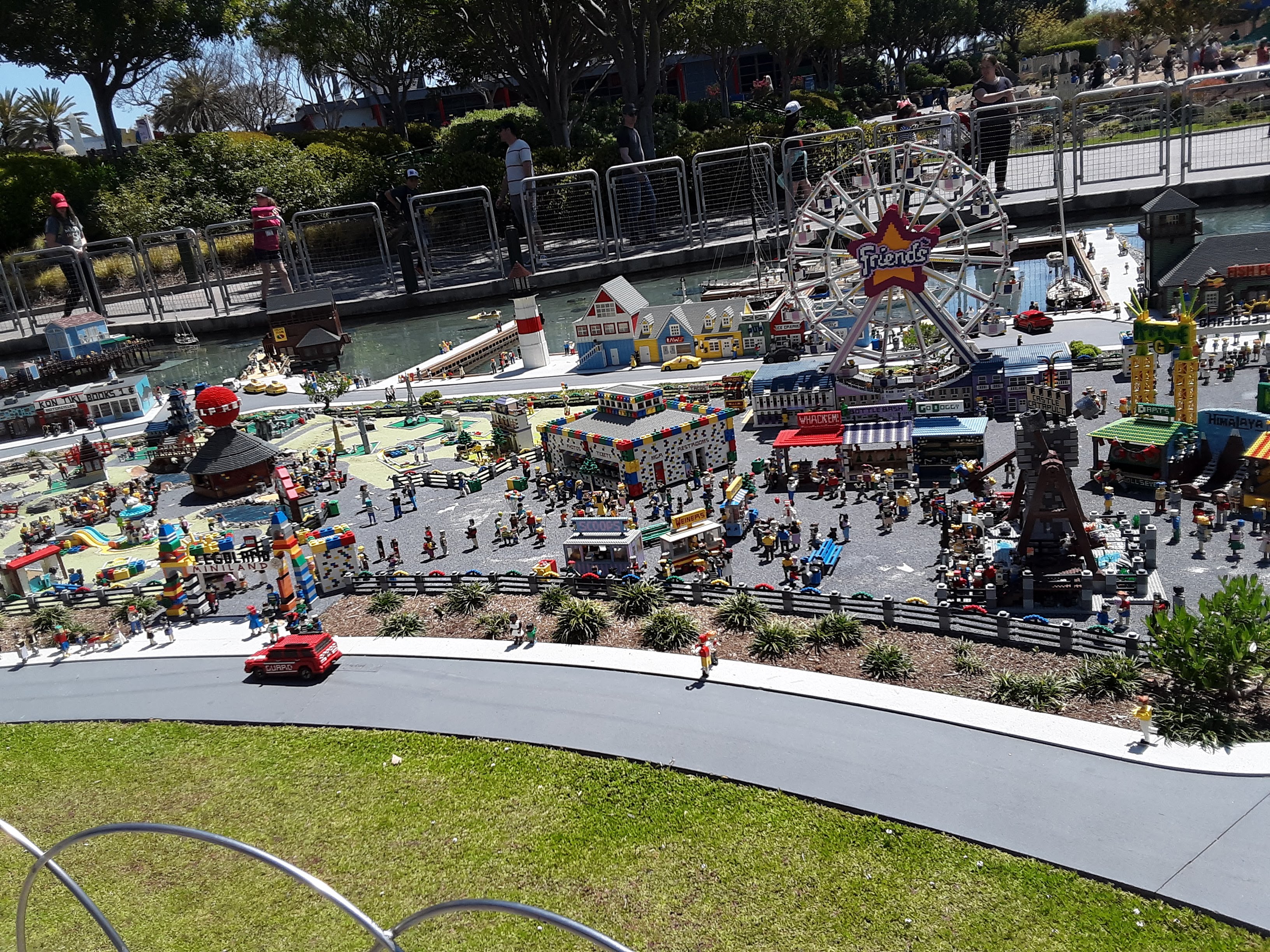 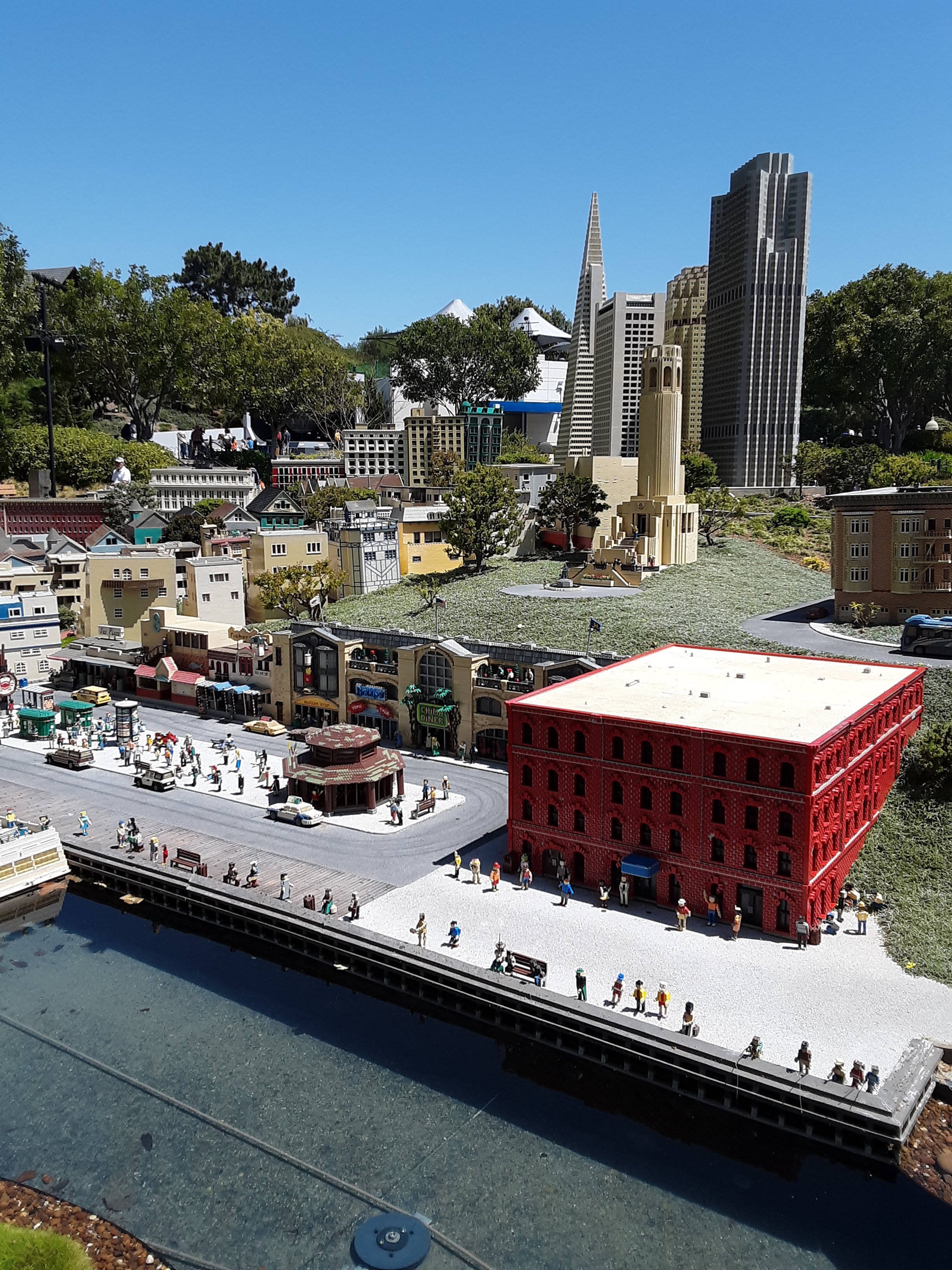 Around 4:30PM, we decided to go to SEA LIFE Aquarium to finish off our day. Our tickets included entrance to this aquarium but you can also buy tickets that only gets you into LEGOLAND, if the aquarium isn't your thing. We spent a good 1 hour in here. Luckily, the SEA LIFE Aquarium is also still open for another half hour after LEGOLAND has already closed. 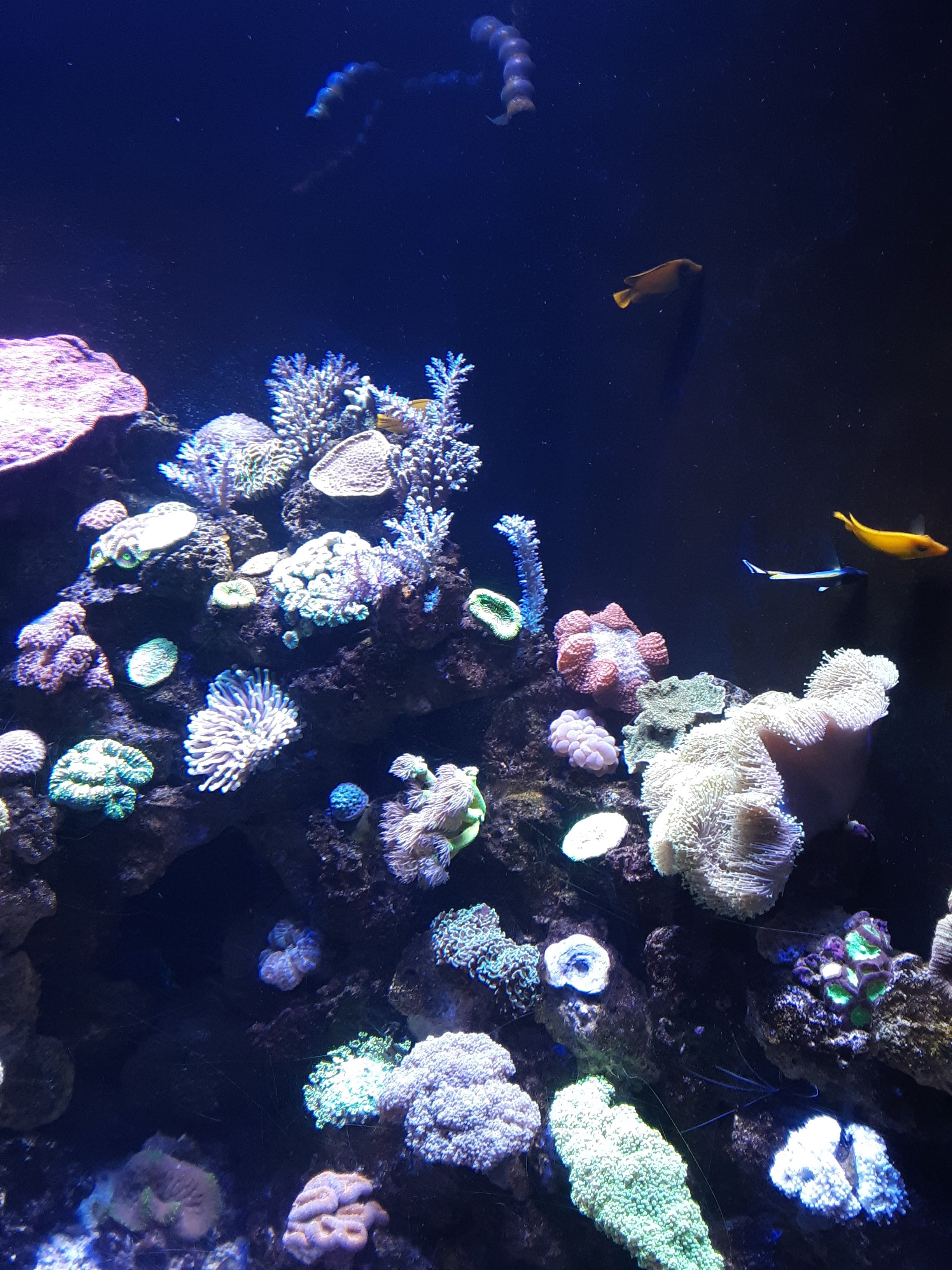 Even though it's not a huge aquarium, there is a lot of different sections to look at. There were jellyfishes, sharks, fishes, starfishes, sea anemone, sea horses, sting rays, octopuses and lobsters. 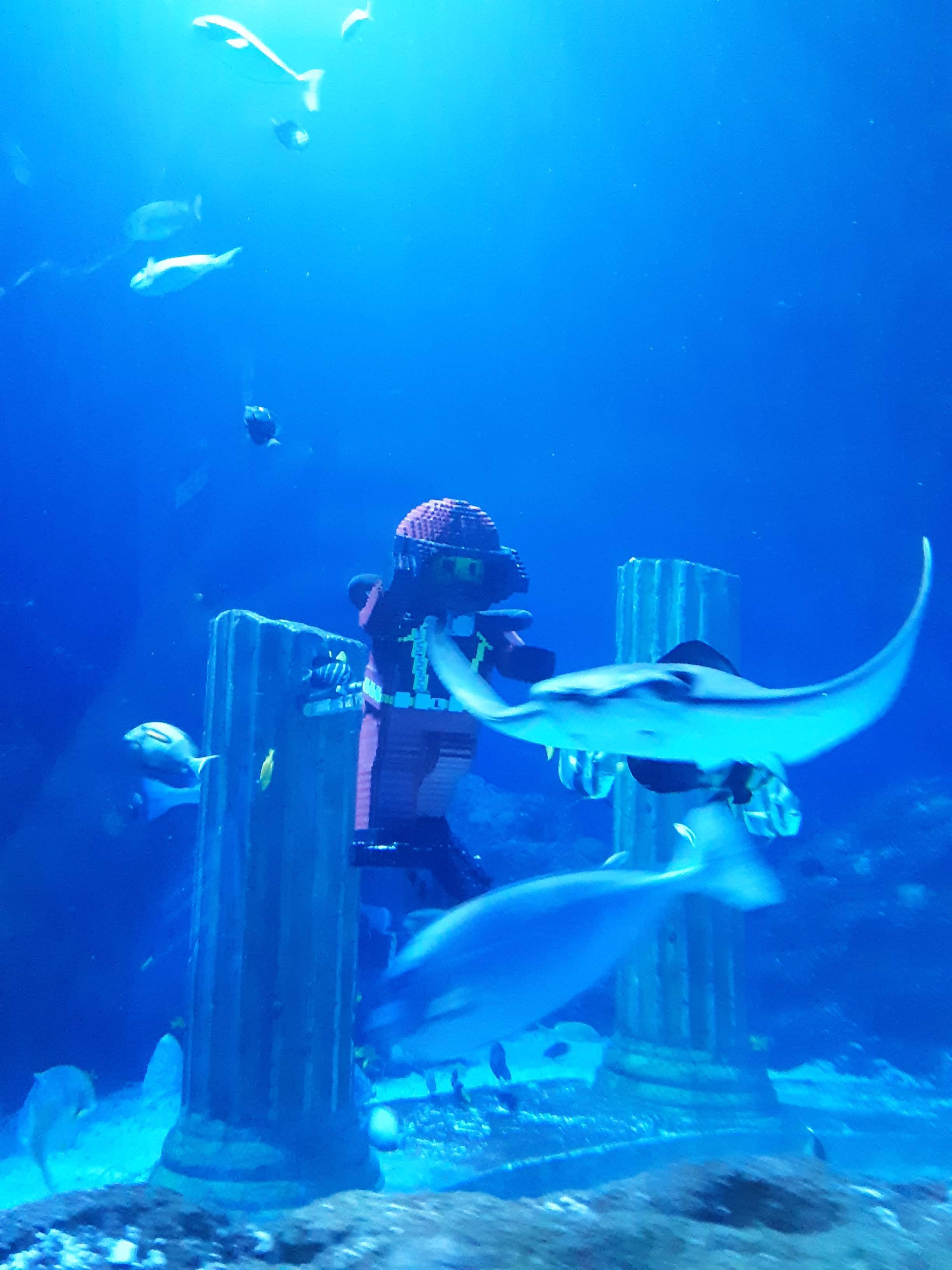 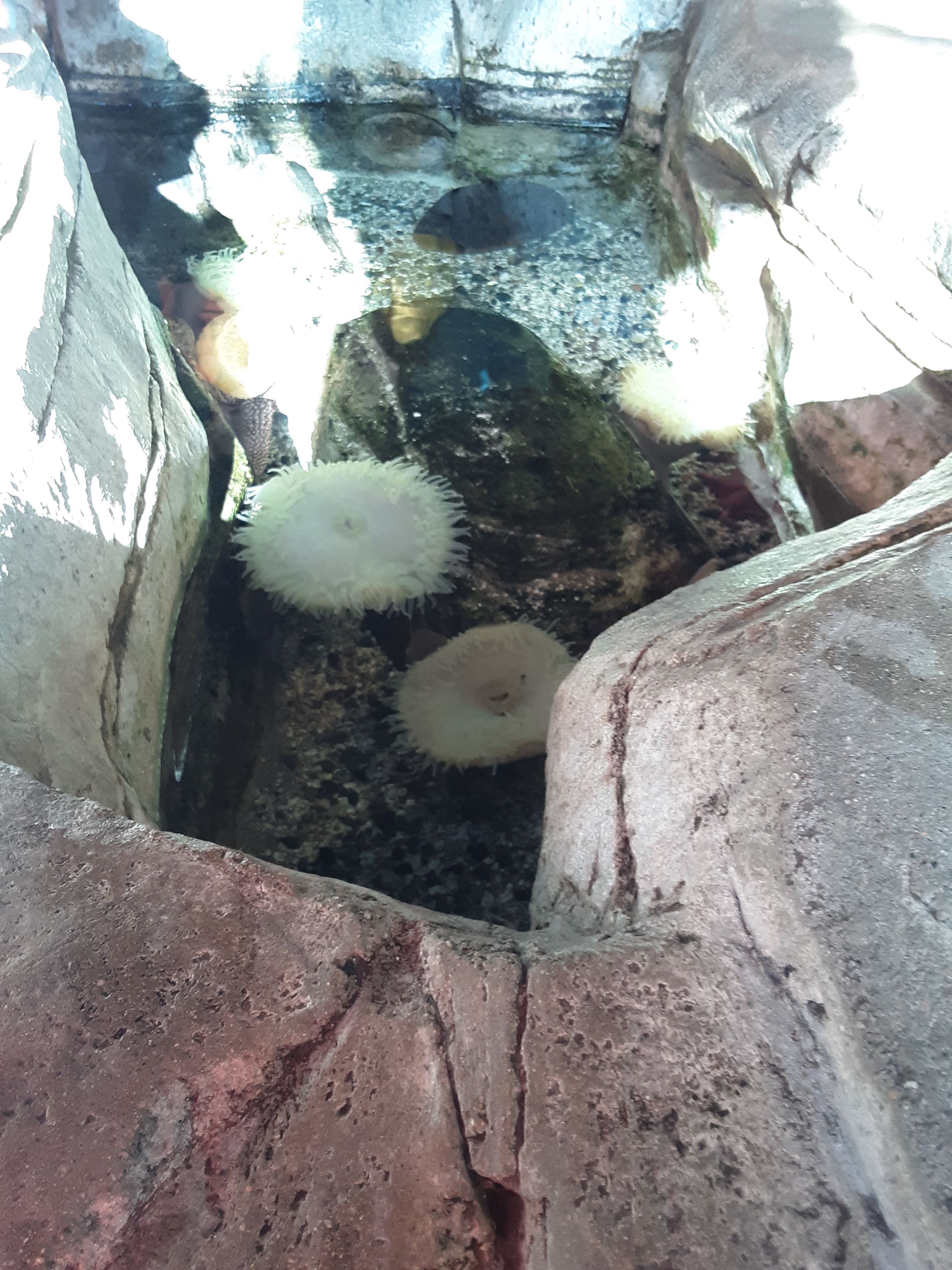 The unique element of SEA LIFE Aquarium is you'll also see Lego figures and structures inside the aquariums as well! They also have a cafe once you exit so if you're hungry, you can get a hot dog or other snacks here.

Many people brought their own strollers inside of the park but because we had so many bags to load in the car with us, we opted to rent one at the park. A single stroller was $14 and a double stroller was only $17. We got the double stroller to fit both of our boys and they loved it. It was really worth it because their little legs get tired and we can get them to our next destination a lot quicker. There were 2 cup holders and some mesh storage space which gave us free hands. We just parked the stroller to the side like the other strollers did when we were ready to hop in a line to get on a ride. 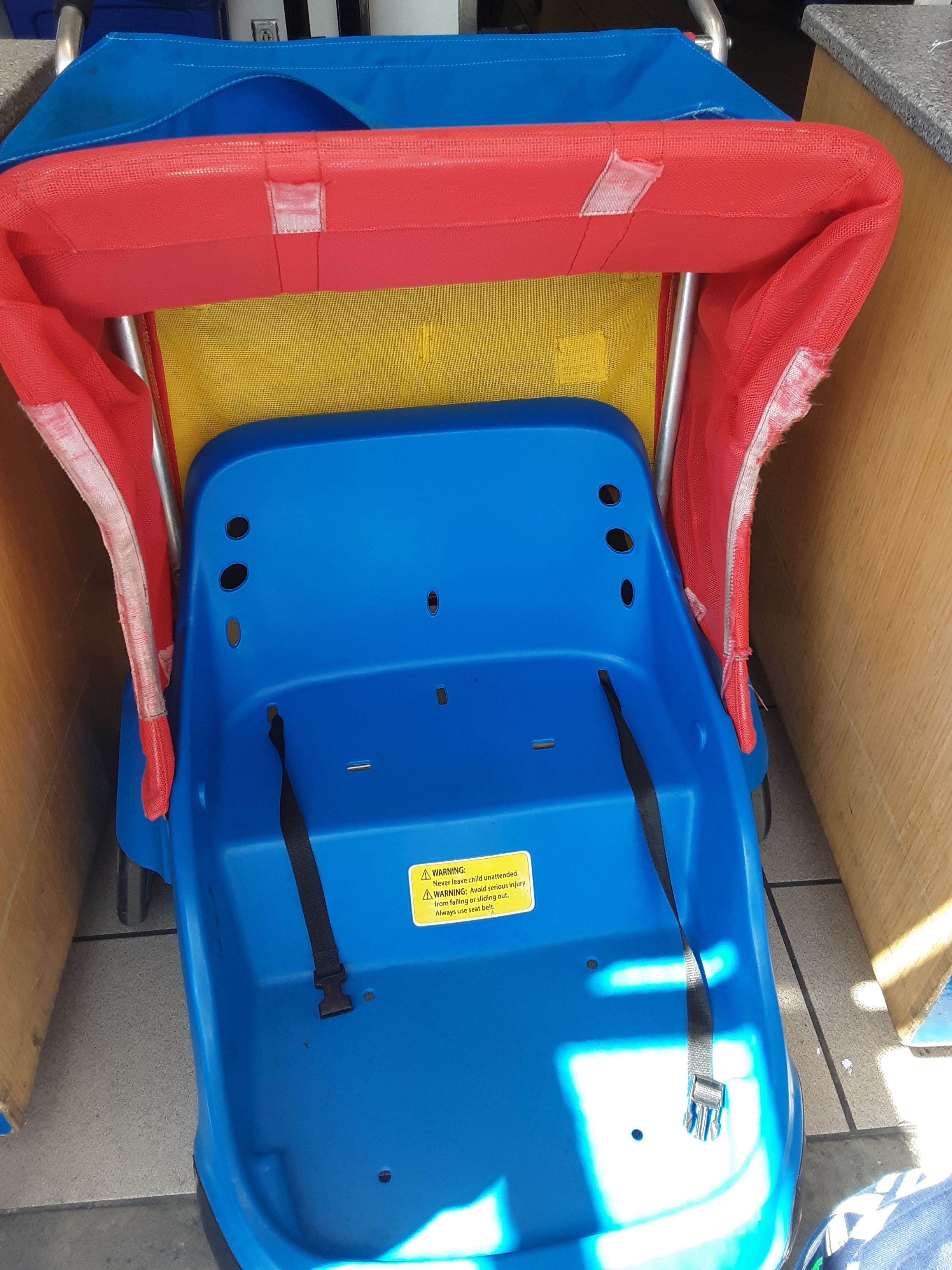 There were two rides that really stood out to us and they were LEGO Ninjago the Ride and LEGO CITY: Deep Sea Adventure. The LEGO Ninjago the Ride was like a video game at the same time. You're shooting lasers at the bad guys with your arms while wearing 3D glasses throughout the ride. The LEGO City: Deep Sea Adventure is a submarine ride with a screen where you click on an item as you see them through the ride. This makes it interactive and fun to search for things while you're also looking at the real fishes underwater!

This LEGOLAND California and SEA LIFE Aquarium trip was so special to us. We were all really impressed with everything and can't wait to take the boys back there again. We hope that this has encouraged them to continue on building things at home and in life and that we can make this an annual trip for us. Feel free to ask us any questions about our trip
. 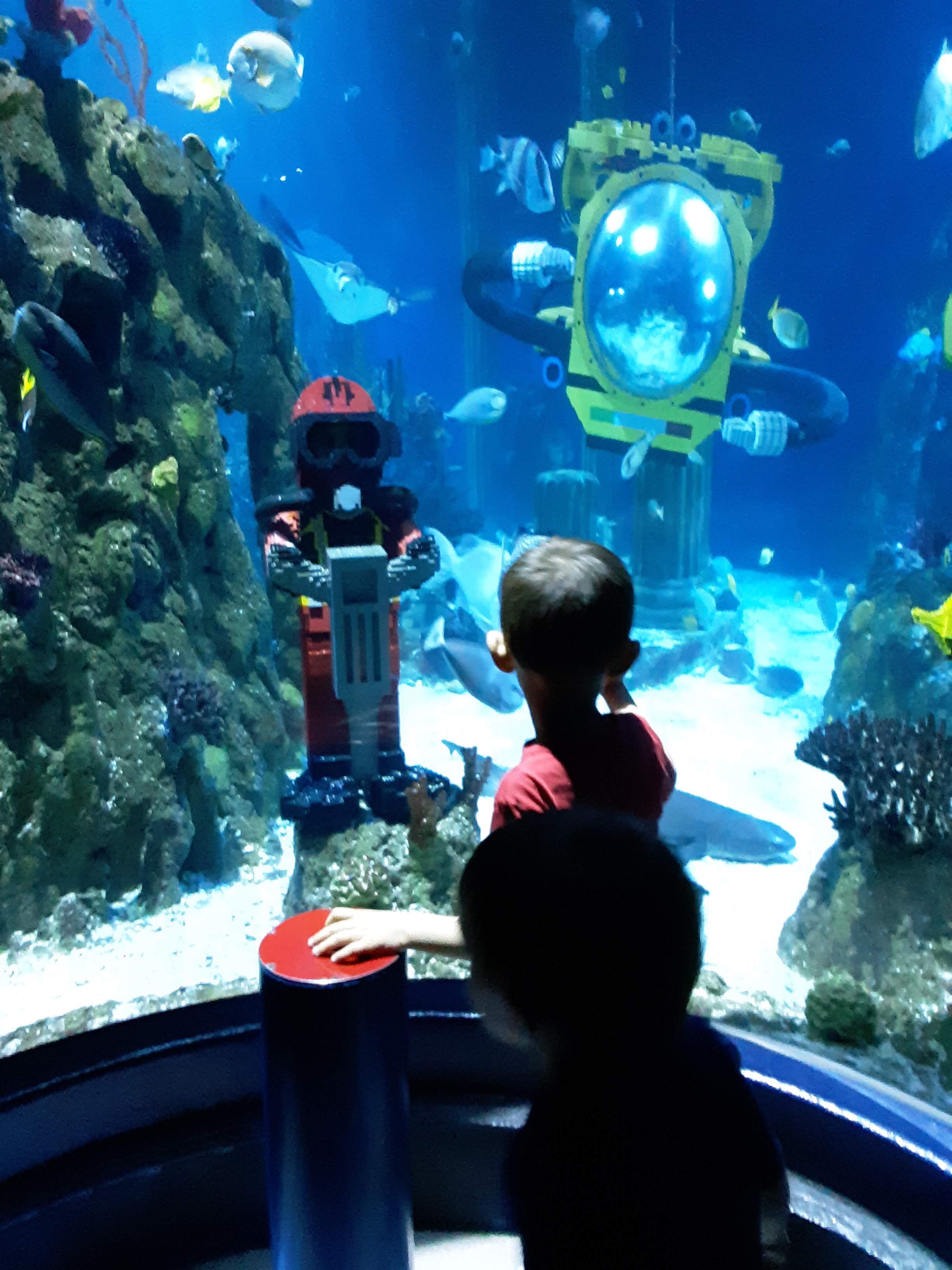 All photos were taken by SanLuisObispoMom.com.